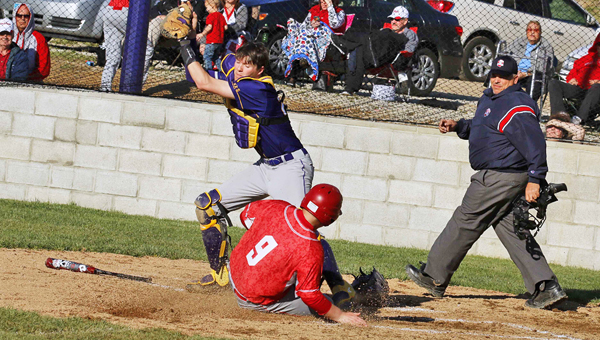 A cup of pitching, an ounce of defense and a tablespoon of hitting. Mix well and bring to a boil.

The Rock Hill Redmen used the perfect mixture to get a 10-0 win over the St. Joseph Flyers on Tuesday.

“We played well. We played good defense, we hit the ball and Kidd and Schob both threw really well. That’s a good recipe for a win. You put all three together and you’re going to win,” said Rock Hill coach Barry Litteral.

Kaleb Kidd and Brandon Schob combined on a four-hitter for the Redmen. The duo struck out eight and did not walk a batter.

Chase Walters was 2-3 for the Flyers.

The Redmen took a 1-0 lead in the third when Landon Smith walked, stole second, Blagg singled and Carpenter hit a sacrifice fly.

Rock Hill scored five runs in the fourth to lead 6-0.

Schob, Lewis and Kidd all doubled for two runs. Kidd moved up on a ground out and Trae Crabtree squeezed home a run.

Smith and Blagg singled and Carpenter had a two-run double.

The Redmen got their final four runs in the seventh.

Lewis then doubled home a run and Jaret Bacorn reached on an error to score the final run.