Price upset over too many walks by Reds’ pitchers 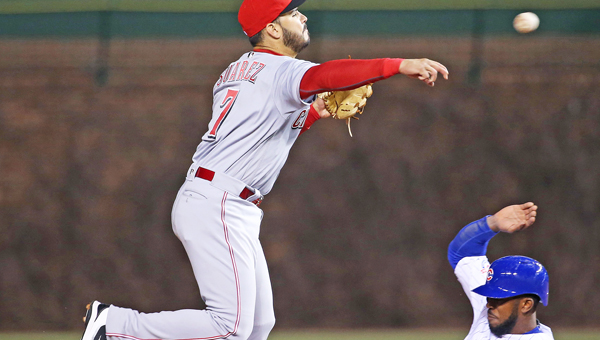 Cincinnati Reds third baseman Eugenio Suarez (7) throws to first base after forcing out the Chicago Cubs’ Dexter Fowler at second base in the third inning at Wrigley Field in Chicago on Thursday. The Reds lost to the Cubs 8-1. ( John J. Kim/Chicago Tribune/MCT Direct)

CHICAGO (AP) — Cincinnati Reds manager Bryan Price wouldn’t give his team a free pass on Thursday night. His pitchers had handed the Chicago Cubs a few too many already.

Jason Hammel pitched six scoreless innings, drove home one run and scored another to lead the Cubs to an 8-1 victory and a sweep of the three-game series.

“This was a series where we didn’t throw the ball over the plate,” said Price, whose team walked 22 batters in the three games. “So far this season, we are averaging about 5.5 to six walks per nine innings, and that doesn’t work.”

“This is all about the players. I have nothing to do with this,” said manager Joe Maddon, who was 15 years old when the Cubs won 11 of 12 to start the ‘69 season en route to a second-place finish. “Our (players) and coaches have done a great job of prepping. One of our goals was to get off to a good start. The guys took it to heart.”

Dexter Fowler and Addison Russell had three hits each for Chicago, and Kris Bryant hit his second home run.

The Reds had at least one baserunner against Hammel (1-0) in all but one inning, but none advanced past second.

They finally broke through in the ninth against Justin Grimm, the last of three relievers.

“Any time you’re scoring seven-plus runs a game and have a staff that knows a little bit of what they’re doing, I think we have a pretty good chance of winning,” Hammel said. “Everybody pitched in tonight again.”

Bryant hit a solo homer on a full-count pitch in the second inning for a 1-0 lead. In the fifth, Hammel lined an RBI double then scored on Ben Zobrist’s sacrifice fly.

“The only one that hit me really was Bryant,” Iglesias said. “But other than that, I just tried to make my pitches and just keep throwing, throwing the ball down in the zone. With Bryant, I made a bad mistake and (he) hit the ball really hard.”

Chicago blew the game open with a five-run eighth. Russell triggered the onslaught with an RBI single, Matt Szczur walked with the bases loaded, Fowler delivered a two-run single and Jason Hayward added a sacrifice fly.

On Saturday, Reds pitcher Tim Melville will get his second major league start, and will do it in front of friends and family in St. Louis.

“The people that saw me pitch in high school now will be able to see me pitch at the professional level. It’s very exciting,” said Melville, who played high school ball in nearby Wentzville, Missouri.

Melville called it a “great honor” to pitch on Jackie Robinson Day. In his junior year, he was presented the Jackie Robinson Award as the national high school player of the year.

BEN THERE, DONE THAT

Maddon preferred Zobrist in the third spot in the order because of his “wonderful ability to get on base.” The veteran hit 35 home runs in the last three seasons.

“That might be contrary to some popular belief and there might be a time when I’ll change it,” Maddon said. “But right now, the way the guys are operating, I like (Dexter) Fowler and Jason (Heyward) and ‘Zo getting on base in front of (the power) guys.”

After seven starts at third base in the first eight games, Bryant made his first in left field.

“My concern with a guy doing that always is his arm,” Maddon said. “You want a short arm stroke. … So when I get guys going back and forth, I urge them not to change their arm stroke to get more on the throw for a longer distance.”

Reds: SS Zack Cozart and C Devin Mesoraco were not ready to start but available off the bench. “They are just a little stiff and coming off surgeries, so I just don’t have them in the lineup, but they are able to play,” Price said. … RHP Jon Moscot pitched a bullpen session before his expected start against the Cardinals on Sunday.

Cubs: INF Javier Baez (bruised thumb) could be activated from the disabled list this weekend. He had two singles in four at-bats and a stolen base for Triple-A Iowa on Thursday. … C/OF Kyle Schwarber will take an active role in pre-game meetings with battery mates while he recuperates from a torn ACL and LCL in his left knee. “If you’re going to be out that long, you have to stay connected with all this stuff,” Maddon said. “So when he comes back from surgery, we’ll keep him involved in meetings.”

Reds: Melville goes against the Cardinals. In his big league debut — a 2-1 victory over the Pittsburgh Pirates — he pitched four innings and did not figure in the decision.

Cubs: RHP Kyle Hendricks will start the opener of a three-game series against the Colorado Rockies at Wrigley Field on Friday. In his first appearance of the regular season, he limited the Diamondbacks to two runs in 6 2/3 innings in a 4-2 victory.

Offense continues to produce as Redwomen get OVC win