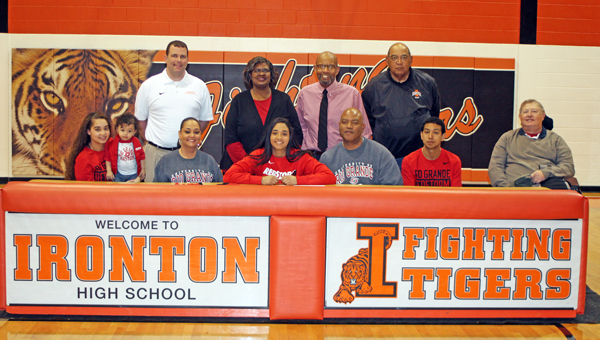 The Ironton Lady Fighting Tigers’ senior basketball standout didn’t always spend her extra time in the backyard shooting free throws. She went to MMA workouts and took Karate lessons that left her a notch shy of her black belt.

The Rio Grande RedStorm coaches saw that fighting spirit in Scott as a player and decided to put it to use in the program by signing her to a scholarship on Friday.

“When I have off days, that’s when I go in and work out. I just love it. I’m a contact person in basketball, I just love one-on-one, waging my own personal battle within the battle of the game,” said Scott.

Ironton head coach Doug Graham knows Scott better than most anyone and he described her as “a fighter.”

“I guess the word for Cheyenne is she’s a fighter. She scraps and battles for everything. She’s competitive,” said Graham.

“She’s one of those pieces that you’ve got to have on a team, that will do the tough work, some of the work that doesn’t get noticed by the press or the people in the stands.”

Scott’s fighting spirit was a key for the Lady Fighting Tigers as they posted the program’s first unbeaten regular season (22-0) and made their fourth Final Four appearances.

All that success this season during Scott’s four-year career wasn’t lost on the Rio Grande staff.

“She brings a personality, a toughness. She’s from a winning program that went undefeated and had one loss in the Final Four. She brings a winner’s attitude to our program,” said Gunnell.

“I think she can have an impact immediately depending on her work ethic during the summer. We have her now listed as a wing guard, so if she can develop her ballhandling a little bit, she can make an immediate impact.”

The 5-foot-9 Scott was a four-year starter who averaged 10.2 points, 4.1 rebounds, 1.9 assists and 1.7 steals this past season in helping the Lady Fighting Tigers reach the Division III Final Four.

She was a third team district pick as a junior by the AP. The Coaches District 13 Association named her special mention as a junior and first team as a senior.

When Ironton lost in the state semifinals to eventual state champion Columbus Africentric, Scott was ready to hang up her tennis shoes.

That is, until Rio Grande came calling.

“I didn’t think I would miss basketball as much as I did once that last game came. I didn’t plan on playing basketball. I just wanted to focus on my academics, but then I realized how much I missed it and I couldn’t let it go,” said Scott.

“When I walked around the campus everyone was so friendly, The staff, the coaches, everyone, it was like being back at home. The community is all behind them just like here at Ironton. This is a great fit for me I thought. It’s just like being at home.”

Scott knows there is no guarantees about playing time, but that didn’t weaken her fighting spirit.

“As long as I give it my all, we’ll see what happens and see what I can do,” she said.

Rio Grande is a member of the Kentucky Intercollegiate Athletic Conference (KIAC) and went 19-10 last season including 12-5 in the conference.

Cheyenne — who want to get a masters in speech pathology — is the daughter of Angie and Charles Scott II.

Jim Walker jim.walker@irontontribune.com   PORTSMOUTH — They say walks will haunt. It must have seemed like Halloween to the Ironton... read more