Man gets 14 years for manslaughter 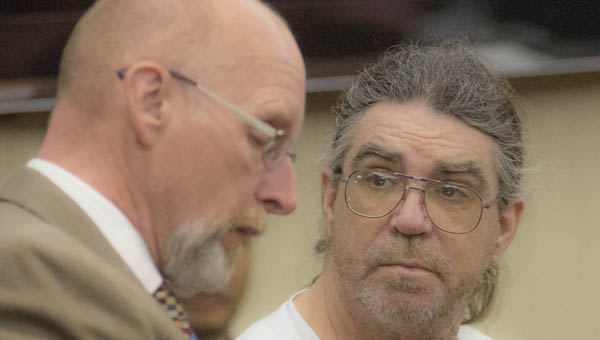 William Elkins, right, with his attorney Mike Davenport, right, during sentencing in Lawrence County Common Pleas Court. Elkins is sentenced for the murder of Ricky L. Crager in July 2015.

A man who pleaded guilty Friday to voluntary manslaughter asked to withdraw his plea before his sentencing Wednesday in Lawrence County Common Pleas Court.

William Elkins Sr., 55, of 3493 County Road 31, agreed to the negotiated plea Friday, but told his attorney, Mike Davenport, that he changed his mind.

“That’s serious enough it needs to be made in writing and it can be addressed at that point,” Judge Charles Cooper said. “Beyond that, I am going to proceed with the actual sentencing hearing.”

Lawrence County Prosecuting Attorney Brigham Anderson recommended the maximum prison sentence of 11 years in prison plus three years for the gun charge, which must run consecutively, for a total of 14 years in prison.

Before Cooper handed down the sentence, Elkins faced the family of the victim to make a statement.

“I’m sorry to the family,” he said. “If I could undo it I would. … I’m terribly sorry. It happened so quick that I could not stop it. I’m sorry that I took your relative.

Elkins indicated he wanted an appeal.

• Seth Coleman, 22, of 918 Adams St., Ironton, was deemed competent to stand trial, following a mental evaluation by Court Clinic Forensic Services. The report also stated Coleman did not meet the criteria for a not guilty by reason of insanity plea.

Coleman is charged with second-degree felonious assault. He is accused of attacking a library employee on Jan. 15.

A pretrial was set for April 27.

Charged with money laundering, corrupt activity Nearly two years after gaming machines were rolled out of Sky Lake and into... read more