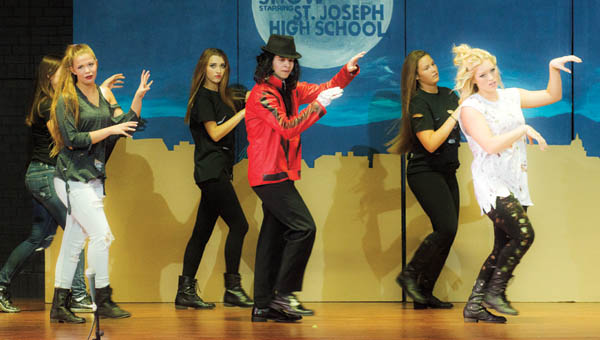 “By the time we have it all added up there is almost 100 participation of the students,” said Maria Whaley, religion teacher and director of the Ashland Youth Ballet, who also directs the special shows at the two schools.

“The structure of the show was based upon Jimmy Fallon’s Tonight show. We took some of the favorite segments.” This year there were special appearances by Father David Huffman and assistant principal Chris Monte.

The variety show dates back to 1976 and turned into its current format of part musical-part comedy show two years later.

All the proceeds from the show and preceding dinner go back to the high school’s general fund.

“So we can continue to do more of these shows,” Whaley said. “Education in the arts has benefits for the kids even if they don’t do it professionally. It gives them self-confidence and they become good employees and good citizens.”

With the new Ironton-Russell Bridge taking shape on both sides of the Ohio River, traffic changes will soon be imparted... read more