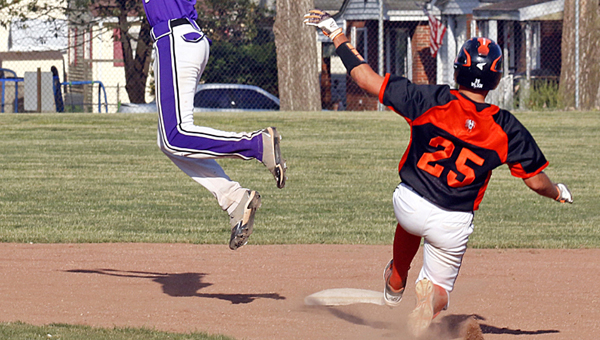 CHESAPEAKE — Baseball is a pitcher’s game and Monday’s game belonged to Dane Wilson and Kolton Webb.

Ironton’s Wilson and Chesapeake’s Webb were locked in a scoreless battle through five innings.

The Panthers got the lead in the sixth but Ironton rallied in the seventh for the 4-2 Ohio Valley Conference win.

“Dane Wilson pitched a great game and contributed with an RBI triple. He has been very consistent for us this season,” said Ironton coach Larry Goodwin.

Wilson pitched a three-hitter as he struck out seven, walked one, hit two batters and only one run was earned.

Webb went 6.1 innings with 10 strikeouts, four walks, a hit batter and all four runs were earned.

“We couldn’t close it,” said Chesapeake coach Justin Davis. “Kolton pitched a heck of a game. He stayed down with it and he had a good curveball.”

Chesapeake (6-7, 5-6) snapped the scoreless tie with two runs in the sixth.

Dakota Blankenship got a one-out single and scored an out later on a double by Casey McComas. Dalton Nida reached on an error to score McComas.

Mason Slagel got a pinch-hit single and moved up on a wild pitch. After a fly out, Wilson tripled for an RBI.

Isaac singled to tie the game. Garrett Carrico walked and Larry Morris had a two-out, two-run double to give Ironton the lead.

“Mason Slagel got the seventh inning rally started and go us going. Larry Morris gave us a big boost with the two-out double. We got a lot of contributions everywhere. It was a total team win,” said Goodwin.

Wilson was 2-3 as Ironton had seven hits.