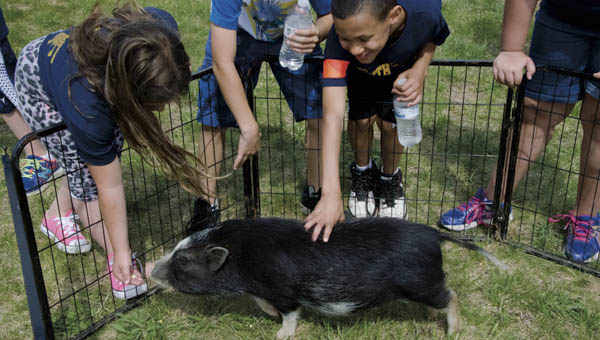 Students of the South Point School District were rewarded Monday for their academic performance with a community celebration that, in many ways, resembled the fun of a county fair.

South Point schools scored the highest in the county in report cards released earlier this year from the Ohio Department of Education, and students from the middle school, South Point Elementary and Burlington Elementary converged on the high school to enjoy their reward.

A crowd of nearly 1,800 students, faculty and parent volunteers gathered on the bleachers as the event began, all wearing matching blue and yellow T-shirts.

The crowd cheered loudly and stomped on the stands as a hobby drone, piloted by Burlington Elementary administrative assistant Michael Clay rose from the school’s track and flew over the gathering to take footage.

South Point Superintendent Mark Christian praised the students for the results of the report cards in his opening remarks.

“All the kids in Lawrence County did well,” he said. “You just did the best.”

Christian gave credit to the faculty for pushing the students.

“If you guys were the best in the county, then it has to be because of your teachers,” he said. “And I want to thank the students. Because, without your hard work, we wouldn’t be here today. Give yourselves a round of applause.”

Following the kickoff, students split into groups and went to the day’s activities.

While, up on the hill beside the school, children enjoyed a petting zoo and pony rides, courtesy of Good News Llamas of Chesapeake and Honey Hill Farms.

In the school’s gymnasium, inflatables were set up for children, while, outside, students from the high and middle schools faced off in a cornhole tournament.

The festivities were paid for by the school district with assistance from parent volunteers, who coordinated children to the activities and ran the grill and concession stand to provide lunch to the crowd.

The report card, based on Common Core-based exams with a multi-state organization, measured the schools’ performance in the 2014-2015 school year. The district’s grade of 3.0 also topped those in neighboring Lawrence County, Christian said.

“Because the kids did so well and we’re the best in Lawrence County, we thought we’d give them a fun day,” he said.