Annual Run By The River set for June 11 in Russell 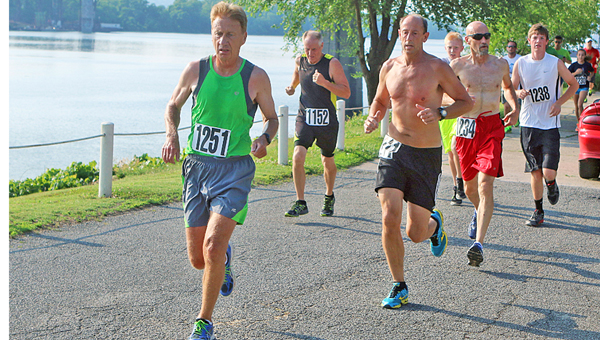 Runners enjoy the scenic view of the annual Run By The River 5K event. This year’s even is scheduled for June 11. (Tim Gearhart of Tim’s News & Novelties, Park Ave. in Ironton)

RUSSELL, Ky. – Registration is now underway for the 39th annual Kiwanis Run By The River, set for Saturday, June 11, in downtown Russell.

The race — which features both 5K and 10K runs — is sponsored by the Kiwanis Club of East Greenup County, Ky. The races begin at 8:30 a.m.

Run By The River features competitive races for men and women in both 5K and 10K runs, along with a number of additional races within the 5K event.

This is one of the few races to recognize both the youngest and oldest runners.

Trophies will be given to the winners and runners-up in the following special events in the 5K race only: Father/son; mother/daughter; father/daughter; and mother/son pairs. Trophies are also awarded to the winner and runnerup in a stroller division and an event the club as dubbed the “Top Dog.” The stroller division is for parents who push a child in a stroller through the 5K course, while the Top Dog refers to runners who race with their canine on a leash.

Trophies are also awarded to the winners and runners up in two group categories: Civic groups and faith-based groups. Groups must consist of at least 10 runners. The winners will be determined by the times of the top 5 in each group. Group members qualify for trophies or medals in their age categories.

Wheelchair entrants are welcome and special trophies are awarded to the top 3 wheelchair participants. There are no awards for walkers but finish times are posted.

“The club hopes the special events will introduce an element of fun into the event and encourage more to participate,” race director Tim Gearhart said. Except for the stroller division and Top Dog category, all entrants for special events must be in by the preregistration deadline of June 4.

Entries received by June 4 will qualify for a discounted fee of $20 ($18 for groups), Gearhart said. After that date the entry fee will be $25, except for entrants 14 and under who are charged $20 through race day. Each participant will receive a top quality colorblock tech shirts and a goody bag.

Race day registration begins at 7 a.m. Those who preregistered will pick up their packets at a special tent, while those who need to registered on the day of the race will report to a separate tent. Runners can preregister and pay with a credit card by visiting the web site runbytheriver.com. Or tristateracer.com. Credit cards will also be accepted on race day.

Run By The River is the longest continuously operating road race in Kentucky, and last year it attracted close to 200 entrants.

The race course is virtually flat on blacktopped streets starting in downtown Russell. Runners travel underneath the Ironton-Russell bridge then along the Ohio River Road through Worthington and back. With a new bridge nearing completion, it is likely the last time the race will go underneath the old bridge, as it’s slated for demolition after the new bridge opens.

For an entry form or more information runners can contact Gearhart at 740-532-9688 or by email at timgearhart204@att.net or Facebook.com/runbytheriver for a printable registration form.