Racing to the crown 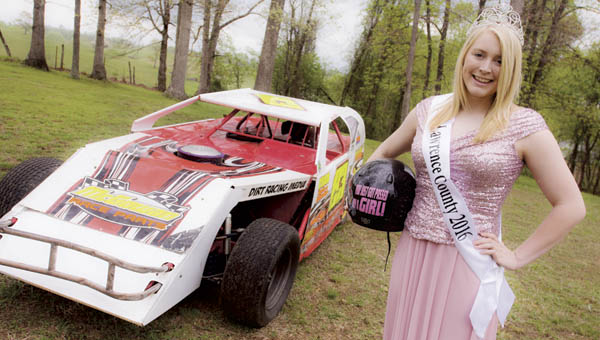 Dawson-Bryant High School junior Brianna Robinson not only comes in front on the tract but also on the runway. Brianna is this year’s 2016 Miss Lawrence County.

COAL GROVE — While Dawson Bryant junior Brianna Robinson is the new Miss Lawrence County, don’t think her life is all about evening gowns and “girlie” things.

Robinson, 16, who was crowned April 16, is an accomplished dirt modified car driver and has competed in more than 60 races in Ohio and Kentucky.

She said her interest in racing began by watching her father, Tim Robinson, a champion driver, on the track.

Her father bought her a go-cart when she was 9 years old, and she began competing in races. When she was 13, she moved up to the dirt car, and was already racing against adults on the track a good three years before getting her driver’s license for the road.

Teaming with her father to work on the modified Lightning Chassis car, her wins include the Turkey Gobbler at Moler Raceway in Williamsburg, Ohio, and she has competed in the Black Jack and Farley Boggs Memorial Race in Willard, Kentucky, and the Fred Dillow Memorial Race in Portsmouth.

Robinson said her favorite things about racing are “the adrenaline and going fast.”

“And winning and beating all these grown men and showing them how it’s done,” she said.

Her father said she has generally been accepted on the track, though there are a few adult men who have issue with her racing, something she can attest to.

“It hurts their ego to get beat by a girl,” she said. “And they’ve wrecked me many times.”

Robinson’s racing helmet is emblazoned with “You just got passed by a girl,” which she said she added after an early go-cart win reduced a male competitor to tears for losing to her, specifically.

She said, ideally, she would love to drive for NASCAR, but realizes the challenges involved.

“It takes a lot of luck and money,” she said. “You’ve got to get everything quite right.”

The Miss Lawrence County competition was organized by the prom committee at Dawson-Bryant High School, with proceeds going toward the school’s prom, adviser Traci Hunt said.

Now in its second year, its age categories run from newborns to 18 years old.

Robinson, who was on the prom committee at the school, was encouraged to enter in the 15-18 category.

She describes the competition as a “glam, not glitz event,” featuring gowns, but forgoing jewels and other flashier aspects.

Hunt said Robinson, as Miss Lawrence County, will appear in the Memorial Day and Christmas parades in Ironton, among other events.

“She is able to do a lot of community engagement,” she said, adding that the possibility of going on to further titles exists. “DeAnna Holliday, a former Mrs. Ohio, who heads things up, takes them in and mentors them.”

In addition to the prom committee, Robinson is active in many extracurricular activities at her school, including playing volleyball, membership in the history club, the Christian Youth Association and the Leo Club.