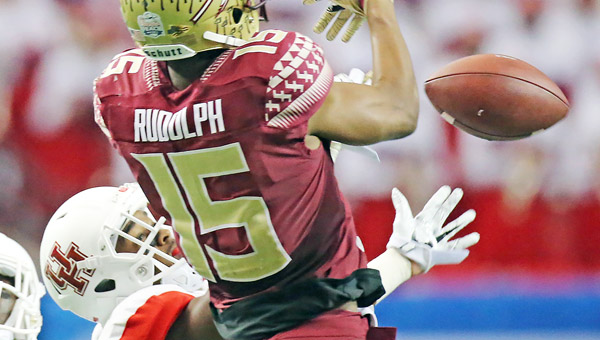 Houston cornerback William Jackson III breaks up a pass to Florida State wide receiver Travis Rudolph during the Chick-fil-A Peach Bowl. Jackson was drafted in the first round by the Cincinnati Bengals. (Curtis Compton/Atlanta Journal-Constitution/TNS)

CINCINNATI (AP) — After being shut out of the top receivers, the Bengals went to one of their favorite standby picks for the first round and added another cornerback who will have to wait his time.

They took Houston’s William Jackson III with the 24th overall pick in the NFL draft on Thursday night. It’s the third time in the last five years that they’ve taken a cornerback with their first pick.

The Bengals are already set at the position with starters Adam “Pacman” Jones and Dre Kirkpatrick — their top pick in 2012 — returning as starters. Darqueze Dennard, their first choice in 2014, is competing for a bigger role on a defense that allowed the second-fewest points in the NFL last season.

This cornerback pick was a surprise.

Cincinnati needed a receiver after losing Marvin Jones and Mohamed Sanu — its No. 2 and No. 3 pass catchers — to free agency. The Bengals signed Brandon LaFell as a free agent, but need someone else as well to complement A.J. Green. As it turned out, three former Bengals coordinators upended their plans.

Hue Jackson’s Browns made Baylor’s Corey Coleman the first receiver selected at No. 15. Then the three teams right ahead of the Bengals also took receivers, including Jay Gruden’s Redskins — who got TCU’s Josh Doctson at No. 22 — and Mike Zimmer’s Vikings, who took Mississippi’s Laquon Treadwell.

At that point, the top receivers were gone and the Bengals had to adjust.

“Well, they got players who we felt would be productive in the league, but that’s the way the draft works,” coach Marvin Lewis said of the run on receivers. “There were a lot of players that went before us that we wouldn’t mind having, but we got one of the ones we really wanted.”

They like Jackson’s size and speed. At 6-foot-2, he fits the Bengals’ profile for tall cornerbacks. Also, he played a lot of man-to-man coverage at Houston, which fits their system. And he was one of the fastest cornerbacks in the draft, allowing him to break up 23 passes last season.

Jackson spent a lot more time with the Steelers in the offseason and thought that the Bengals’ biggest rival would take him at No. 25.

With the receivers gone, the Bengals got a chance to get him instead. Jackson had figured he’d be getting a call from the Steelers.

“I definitely did,” he said, in an interview from his home in Houston. “Being with them, we had a great chemistry. They were telling me a lot of good things. So I felt they were coming, I definitely did. They (the Bengals) surprised me.”

The Steelers wound up taking cornerback Artie Burns from Miami at No. 25.

The Bengals want Jackson to get stronger and work on his run defense as a rookie. They’re hoping he makes an impact on special teams in the meantime.

Browns trade down to No. 15, take Baylor WR

BEREA (AP) — The Browns came into the NFL draft craving speed, a downfield target and someone to score touchdowns.... read more