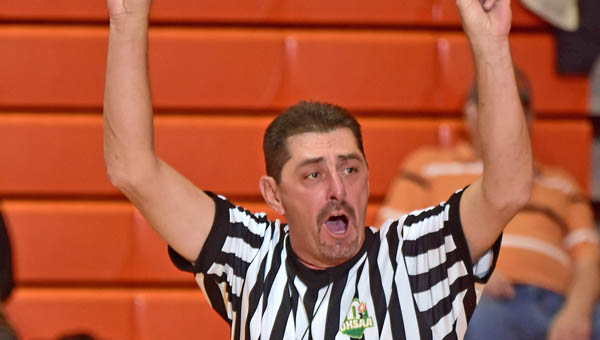 Pinkerman played football at Rock Hill and he learned the lesson that when you get knocked down, you get right back up. It was a lesson he had to apply as he began a fight for his life.

There was Rocky, blood splattered on his body and boxing shorts, his eye swollen and his legs wobbling, but still motioning to Apollo Creed to “bring it.”

Creed shakes his head, incredulous that Rocky is still standing. He keeps knocking him down and Rocky just keeps getting back on his feet.

Finally, Rocky strikes back and it’s Creed who goes down for the count.

The longtime basketball official has faced plenty of hostile environments and heard the rants of coaches as they patrolled the sidelines. But nothing knocked him down like everyone’s bitter foe: cancer.

It was 2008 when Pinkerman got pneumonia and went to the doctor where they discovered he had cancer. Not only was it cancer, it was Mesothelioma, a form that spreads rapidly.

“(Radiologist) Dr. Ben Roach saw it and he said, ‘you need to see a doctor.’ Four days later they took part of my lung out,” said Pinkerman.

Pinkerman was scheduled to work three games at the district tournament and one game at the regionals. He was excited because the regional game would bring an evaluation. If he got favorable marks, his first-ever state tournament game would be in the future.

“In the first district game at halftime my legs went numb but I finished the game. I’d just finished 16 weeks of treatment. The trainer asked me if I was a diabetic and I said no. The trainer said, ‘You have neuropathy. You may never walk again.’”

Neuropathy is a degeneration of the nerves. It got so bad that Pinkerman was forced to retire from his job as a mechanic at CSX because of all the concrete he had to walk on for hours that affected his legs. He didn’t officiate for a year and a half.

“I had to learn to walk and run all over again,” said Pinkerman.

“They’re trying to regenerate nerves with steroids but it’s not working. They’re trying everything still. I see a doctor every month. They send me to the best from the Cleveland Clinic to Children’s Hospital (in Columbus). I ride a bike every day.”

Pinkerman played football at Rock Hill and he learned the lesson that when you get knocked down, you get right back up. It was a lesson he had to apply as he began a fight for his life.

And fight he did.

Less than two years later, Pinkerman walked back onto the basketball court.

His first game back was Racine Southern against Eastern Meigs. Both teams were undefeated. It wasn’t the first big game Pinkerman had ever officiated, but this time the circumstances were different on a personal level.

But just like Rocky, Pinkerman motioned to “bring it.”

“There were a little nerves, but there’s a little nerves anytime you walk into Eastern Meigs. I threw the ball up and once the ball was tossed you just go. It was business as usual. I got right back in the flow,” said Pinkerman.

“But I had a different attitude. You never see me not smile during a game. I talk to the kids more.”

Missing his chance at the regional game six years ago probably cost Pinkerman a chance at a coveted state tournament game. And while he continues his physical therapy and monthly doctor visits, he still works hard at his craft in hopes of bouncing back up off the canvas one more time.

“I want to keep doing it for maybe four more years. It all depends on my health. It depends on my legs. I want to do a state tournament. Three of the guys I’ve mentored have done it. I was proud of them,” said the 55-year-old Pinkerman.

Oddly, Pinkerman never played high school basketball. It was a bad call due to the lack of knowledge of the rules by an official that got him irate.

It was 1990 and Pinkerman went to Hall of Fame official Joe Swarts to ask about the rule. Swarts told Pinkerman that the local chapter was giving a class the next week and invited him to attend.

“I told him I’d love to learn the rules,” said Pinkerman. “I wanted to be a coach. I took the class and once I did I fell in love with it.”

“Ronnie Vanderhoof made me read the rule book all the way to the game. I was his jayvee guy. He got me ready for varsity. I had a full schedule my first year (of varsity officiating),” said Pinkerman.

“If you take them with you, they learn. Ronnie was a fun guy to be around, but when he was on the court he was serious. I did that with Jason (Meenach) and Chuck (McKnight) and Kyle (Gilmore). I made them stay and watch the varsity games. You learn.”

The training he was given worked. Pinkerman got four postseason games the first year he was tournament eligible.

Pinkerman isn’t shy about giving technical fouls when necessary, but it is not something he likes to do.

Chris Meenach — who has worked the past four years with Pinkerman along with his own son Jason — said Pinkerman is the consummate professional.

“Tommy’s a warrior. He’s been through it,” said Meenach.

“The one thing about working with Tommy is he always has your back. He’ll never throw you under the bus. He’s always there when you need him. If someone says anything to me or Jason, he’s there to calm a coach or a player down.”

Besides high school basketball, Pinkerman officiates youth games on Sunday and he has worked the MRDD benefit basketball game for the past 20 years.

“I love doing that (MRDD) game more than a regional final. Those kids love the game so much,” said Pinkerman.

“Once I can’t do high school, I’ll go down to grade school. I do six games every Sunday now. I love it. I tell kids what they are doing wrong. To me grade school is instructional basketball and you’re supposed to be teaching. I’ve had parents tell me they like that.”

Pinkerman and the older members of the Ironton Chapter began a youth basketball tournament this year. The proceeds will send young officials to camp to become better officials, but they will also fund scholarships for student/athletes who are from Lawrence County plus Ohio Valley Conference members Portsmouth and Gallipolis.

“We almost lost our chapter. We were down to 15 of 20 members. We just stuck together and started building it back up. We’re up to 63 now. We’ve got good officers. We want to be an impact in the community with scholarships and to help our young officials to learn and get better,” said Pinkerman.

“The thing I’ll be most proud of is just being able to help some kids. I’ve made plenty of money and it’s just time to give back. We’ve got a great chapter. All our guys are willing to help out. Tommy Hardy, Tom Walden and Gary Jenkins have all been at it for 30 years. It’s not going to benefit them. They’re not going to camps. They’re proud of their chapter. They want to help out the community.”

Wham! This knockdown wasn’t Tommy Pinkerman. It was cancer crawling into a neutral corner.

And standing across the ring staring it in the eye is Pinkerman, motioning with his fists and a whistle in his mouth.

NEW BOSTON — By any measure, Oscar Perry, of Lucasville, has had a very successful life. The 79-year-old pastor has... read more