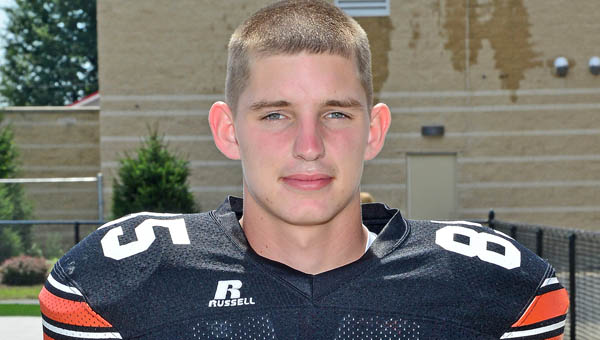 It was a classic scene — from the movie “True Grit.” John Wayne as Marshal Rooster Cogburn going against Ned Pepper and the three Ferrell men.

“You think one on four’s a dogfall?” Ned Pepper yelled across the field at Cogburn.

“I mean to kill you in one minute, Ned, or see you hanged at Judge Parker’s convenience. Which will it be?” retorted Cogburn.

“I call that bold talk for a one-eyed fat man,” said Pepper.

“Fill your hand you (expletive deleted),” said Cogburn as he put the horse’s reins in his mouth and a gun in each hand as he rode across the field shooting at Pepper and his gang.

“No grit? Rooster Cogburn? Not much!” said Mattie Ross in her praise as she watched the marshal gun down the outlaws.

There was a sequel and even a remake of the movie, but there was a real life version of “True Grit” made just last fall. However, this time it didn’t involve any cowboys or blazing guns.

It was on the football field and involved 6-foot-5, 210-pound Lucas Campbell.

For the second year in a row, Campbell had suffered a knee injury, only, this time, it was even more severe. A surgery was scheduled and a rehab process would follow.

“When it first happened I knew something bad had happened because I’d never felt something like that before. When I put pressure down on my knee, I knew it wasn’t good,”

“That night I was just thinking that I may never play football again. It was just a sad thought.”

Although it appeared Campbell’s season and high school career had come to an early finish, that wasn’t the case in Campbell’s mind. He planned to play again, and not after any surgery.

What seemed crazy to others was not as risky as it appeared on the surface. After talking with doctors, Campbell was assured there would be no additional damage to the knee but there would still be pain.

“We were told it wouldn’t do any more damage. Lucas is an old school kid. He’s a tough kid and he has a high threshold of pain,” said Ironton head coach Mark Vass.

“He has always been a dedicated kid and he was always into football. I’ve seen guys before who played on that kind of injury. This is high school football and he has the rest of his life so we didn’t want him to hurt himself, but he wanted to come back and help the team. That was pretty gutsy.”

After thinking about the situation and still filled with the drive to play, Campbell made the decision to try and play in the playoff game against Wheelersburg, which he did for more than two quarters at defensive end.

Once the game started to get away from Ironton, Vass pulled Campbell to avoid any further risks of injury.

Campbell admitted it was tough playing on virtually one leg.

“Well, I’m 18 and basically it’s all up to me. It’s my decision. They tried to tell me not to play, but I wanted to play and I ended up playing,” said Campbell.

“I’m not going to lie. It was one of the hardest things I’ve done in my life. It was hard to move out there. Basically I was using just one leg. Blocking was the hardest thing, having someone push up against me. My knee was so unstable it was no telling when it was going to give out. It was just rough out there.”

Despite the difficulties and pain, Campbell said he has absolutely no regrets with his decision to play.

“Honestly, no. When I had the surgery, nothing else was wrong so playing in that game didn’t hurt my knee any more. I really enjoyed playing because it was my last game of high school football so it was something special to me,” said Campbell.

The injury wiped out Campbell’s chance to play basketball and baseball, two other sports that he enjoys and has missed the past two seasons because of injuries.

But Campbell took a philosophical approach to the situation.

“It’s pretty tough. I love every sport honestly. I just love playing sports. I like basketball just as much as I like football. It just hurts knowing I could be out there helping the team out and I can’t because I got hurt. But stuff happens to athletes. Everyone gets hurt eventually,” said Campbell.

Fortunately, for Campbell, there is hope on the horizon. John Carroll University, Alderson-Broadus, Morehead State and Gannon (Pa.) University have all expressed interest.

“(Arth) told Lucas that he has no doubt that from watching his video and him being an Ironton Fighting Tiger that he would receive significant playing time his freshman year,” said Miller.

A three-year starter at Ironton, Campbell just wants another chance to play football.

“I’d really like to play football at the next level because I just really love the game,” said Campbell.

That’s pretty bold talk for a one-legged football player. But then, Lucas Campbell has got the grit to take the game by the reins and ride head-on into the challenge.