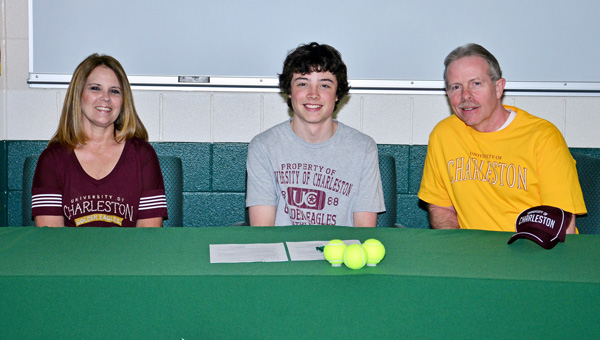 Fairland Dragons’ senior Jason Prince signed a letter-of-intent on Friday to play tennis at the University of Charleston. Among those attending the ceremony were, from left right, mother Pam, Jason and father Rick. (Kent Sanborn of Southern Ohio Sports Photos)

PROCTORVILLE — A lot of lead singers in bands like to eventually break out and have a solo career.

It’s just the opposite for Fairland Dragons’ senior tennis player Jason Prince who has been playing solo throughout his high school career.

Since Fairland doesn’t have a team, Prince plays on his own in the postseason and is unable to play an regular season matches.

But he will become part of a group next fall after signing a letter-of-intent to play for the University of Charleston.

“Yeah, it would have been more fun (on a team) but, hey, you’ve got to do what you’ve got to do,” said Prince. “I’m excited for the team aspect of tennis. That’ll be fun.”

“In the end, (Charleston was) just a little bit closer to home and I knew some of the people who played there,” said Prince.

“I definitely think I’ll be in the lineup right away. I don’t know how high I will be. Hopefully I can start out pretty well.”

Prince said he expects to play both singles and doubles for the Golden Eagles.

Prince said his biggest help and influence on the court has been his tennis instructor Bob Mooney. With no regular season matches as the only tennis player in the school, Prince must rely on hi workout sessions with Mooney.

“I had a lot of practice, normally a few times a week. I went up to Teays Valley (W.Va. Tennis Center). That’s where I practice. I just go there and prepare for the tournaments since I can’t play matches at times when everyone else is.”

The practice sessions have worked well for Prince who has qualified for the Ohio High School Division II state tournament in each of the past two seasons.

“Hopefully it’s another one (state tournament) this year. Hopefully I go farther this year. The last two years have been disappointing close first round losses. This year I want to do better,” said Prince.

“It’s been a good experience. This year I think I’ll be more prepared for it.”

Jason — who plans to major in accounting — is the son of Pam and Rick Prince.

CINCINNATI (AP) — The Bengals used the final day of the draft to help their defense, which is already one... read more