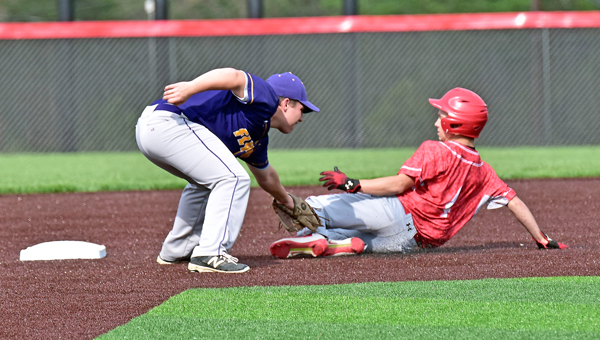 PEDRO — The theory of “small ball” is get them on, get them over and get them in.

That was the theory used by the Rock Hill Redmen on Tuesday as they edged the St. Joseph Flyers 3-0.

“We got them on, moved them over and found away to get them in,” said Rock Hill coach Barry Litteral.

“We had good pitching and good hitting and got the timely hits when we needed and it all adds up.”

Kaleb Kidd gave Rock Hill the good pitching with a five-hitter. He struck out eight and walked two.

Clay Willis threw well for the Flyers. He gave up eight hits, struck out four and walked two.

Rock Hill (11-8) got a run in the first inning when Heath Carpenter doubled, Sean McFann beat out an infield hit and Brandon Schob hit a sacrifice fly.

The lead went to 2-0 in the second on a double by Kyle Stanfield, Trae Crabtree’s sacrifice bunt and Landon Smith’s ground out.

The final run scored in the fifth.

Smith walked, Blagg had a bunt single, Carpenter hit into a fielder’s choice and McFann bunted for a hit to drive in the run.

Blagg and McFann each went 2-3 for the Redmen. Zac McGraw was 2-3 with a double for the Flyers.

CINCINNATI (AP) — When it comes to giving up runs game after game, nobody in major league history has been... read more