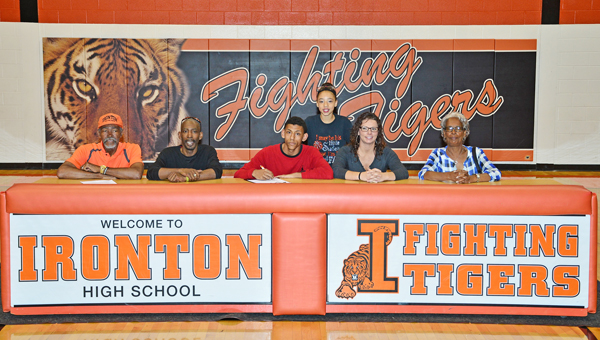 Marques Davis got what he wanted, and in the process the University of Rio Grande got what it wanted.

Ironton Fighting Tigers’ senior guard got his chance to play college basketball and the RedStorm got the long-range shooter it wanted when Davis signed a letter-of-intent to play for the University of Rio Grande on Wednesday along with teammates Phillip Kratzenberg and Travis Carey.

“(Rio Grande) just kind of showed up. I was looking at another school, but I really didn’t want to go there. I like Rio. It seems fun to play at. I like the program. Everything up there seems calm. It’s away from everything so it should be fun.”

While Davis likes Rio Grande, the RedStorm coaches like Davis and what he and his two teammates will bring to the program.

Assistant coach Phil McKnight likes how the trio will fit into the program’s plans.

“In our system we get up and down a lot. That plays into how Phillip plays. If you get Marques to a corner or on a wing, get him wide open, he’s going to hit a shot. And when you get up and down, Travis uses his athleticism to play and outwork guys.”

But the most amazing statistic for Davis was 43 percent shooting from the 3-point line. Davis is looking forward to getting the green light to shoot.

“Coach McKnight said college needs a shooter like I can shoot and he’s excited to have me,” said Davis.

The chance for the three teammates to play together at the college level was something that appealed to the players.

“Me and Travis (Carey) made the decision to play at the same time. Phil wasn’t going to play because of his shoulder, but then he decided to play later,” said Davis.

“When we first go up there, we’re going to start on the jayvee team and we’ll get a chance to work our way up to the varsity.”

Marques — the son of Marq Davis and Michelle Easterling — plans to major in business and marketing.