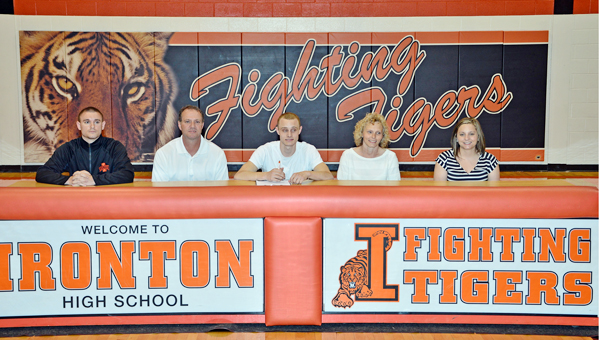 A second shoulder injury last season had Kratzenberg soured on the idea of playing college basketball.

But after some second thoughts, Kratzenberg had a changed of heart and signed a letter-of-intent to play for the University of Rio Grande RedStorm on Wednesday along with Ironton Fighting Tiger teammates Marques Davis and Travis Carey.

“But after a couple of weeks, I was thinking about it and I got a little better. I still have to have surgery, but I decided I still want to play no matter what.”

He was a first team All-Ohio Valley Conference pick, a second team Division III All-Southeast District selection and was honorable mention on the Associated Press All-Ohio team. He was also a Coaches District 13 first team selection.

“At first I didn’t want to play after the season. But Rio Grande stuck through and still stuck with my scholarship and said I could play. That’s why I want to go to Rio Grande,” said Kratzenberg. “I’m ready to go. I’m excited to go.”

Kratzenberg’s toughness was something that reminded the Rio Grande coaches of RedStorm player Travis Elliott who also played at Ironton.

“Coach (Mark) LaFon is a Rio grad so he knows what Rio is like and what is expected from the Rio program,” said Rio Grande assistant coach Phil McKnight.

“Travis Elliott is an Ironton High grad and with a guy like that, there’s surely a few more like that coming out. Those kids work hard, they can take someone criticizing them to help them be better people.”

Kratzenberg said his surgery is scheduled “very soon” and he’ll have about six months recovery time. He said the possibility of being red-shirted hasn’t been discussed.

Phillip — the son of Robert and Kim Kratzenberg — is undecided on a major.