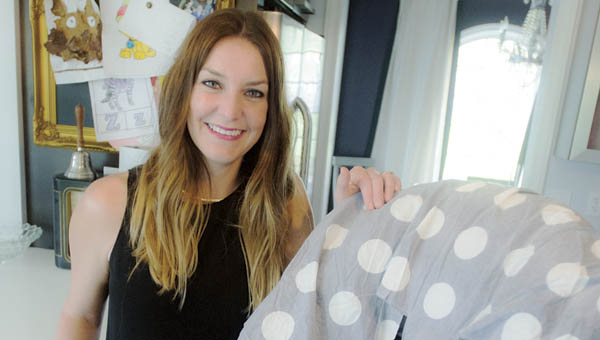 Rome Township resident Maggie Gue with her invention Save Your Seat. The disposable cover is placed over your child’s car seat and will aid in spills and wear on the car seat.

ROME TOWNSHIP — As the mother of four children, Maggie Gue faced an all too common problem.

“I couldn’t keep up to keep my car seats clean,” she said.

Gue said mothers do not have the time to take soiled car seats apart, wash them, and wait on them to dry.

“We were Youtubing videos to see how to put them back together,” she said. “I said, ‘There has to be something else.’”

Gue, who is the manager of the Proctorville Giovanni’s, decided to come up with a solution. She started her company, “Save Your Seat,” offering waterproof seat covers, made from polyurethane and cotton.

The disposable covers, which she said can last up to three months, feature multiple perforations, allowing for a one-size-fits-all for car and booster seats.

Gue said she first got the idea in 2011, but getting a prototype together took until about 2014.

“First, I called polyurethane companies, then I had to hunt for a manufacturer,” she said.

Gue said she exchanged drawings and pictures with them for about nine months before the product was finalized.

“I really had to sell myself,” she said.

The final product, with packaging designed by Bulldog Graphics in Huntington, sells in packs of four or as singles on her website shopsaveyourseat.com and on baby merchandising site byebyebay.com, as well as locally at Mug and Pia on Third Avenue in Huntington.

Recently, she has launched a fundraising campaign through Kickstarter to expand her business, and to get the product carried in larger chain and discount stores.

“I think, for this project, it belongs in chain stores like Target,” she said. “It’s something you use often and, when you go to get necessities, you can grab some.”

Gue said the campaign and accompanying video has led to increased awareness of her product.

“The reaction has been really good,” she said. “We’ve gained orders through the Kickstarter.”

For more information on the campaign, visit, https://www.kickstarter.com/projects/2011000667/save-your-seat-disposable-covers-for-juvenile-car.

Completion date set for midsummer Two areas in the county are targeted for resurfacing projects this spring This week starts... read more