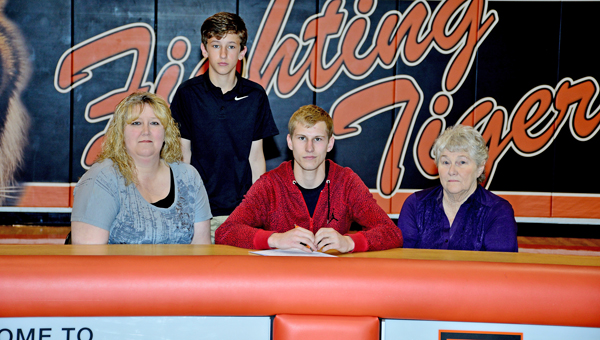 It must have seemed like Christmas to Travis Carey. He had a wish list and one of those wishes came true.

Carey’s desire to play at the next level was realized on Wednesday as he signed a letter-of-intent with the University of Rio Grande RedStorm along with Ironton Fighting Tigers’ teammates Phillip Kratzenberg and Marques Davis.

“I was really wanting to play at the next level and Rio Grande was the only place where I could do that,” said Carey.

“It’s a small school and everyone knows each other and we’re going to have a good team.”

Expected to play a wing, Carey knows what it will take to make up for lost playing time.

“It’s going to take a lot of hard work and practice. A lot of time in the gym. And a lot of effort in the books, too,” said Carey.

Injuries plagued Ironton the first half of the season, but Carey’s presence in the lineup helped the Fighting Tigers finish strong at 12-11.

“I thought it was a very good season. I felt the beginning of the season was kind of rough, but then we glued it together and really came together as a team and got the last couple of victories we needed to make it above .500 and to the sectional finals at Jackson,” said Carey.

“Three different guys for three different positions. We feel like they can all do a great deal of good in our program as well as our system. In our system we get up and down a lot,” said McKnight.

“Travis uses his athleticism to play and outwork guys. I think our system fits the mold for them and we’re real excited to have them come to Rio Grande.”

Carey said the Ironton trio will begin their careers on the jayvee team but he hopes they progress rapidly.

“They’re wanting all three of us to be ready by our junior year (to play varsity),” said Carey.

Travis — the son of Jenni Carey — plans to major in business and marketing.