Crowds turn out for service 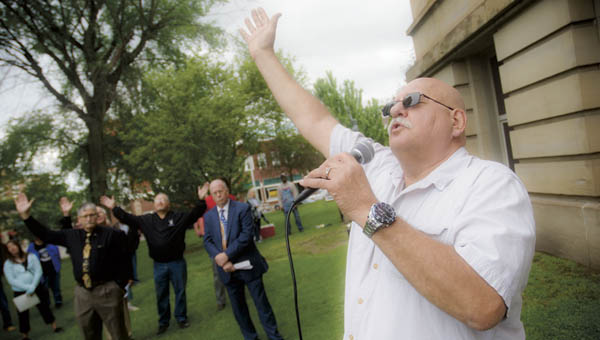 Terry Jones says a prayer during National Day of Prayer on Thursday on the front steps of the Lawrence County Courthouse.

The courthouse lawn was filled with people showing their faith and their belief that America needs to go on another path.

Thursday was the 65th National Day of Prayer across the nation and about 90 people came to the courthouse to be a part of the event hosted by the Ironton Ministerial Association.

“This is the resurrected Ironton Ministerial Association,” Rob Hale of the First Church of the Nazarene, told the crowd. “I’m so encouraged to see you here.”

This was one of the largest crowds in recent history for the national day and the largest number of ministers participating.

The ceremony began with Hale asking Susan Taylor to lead in the national anthem.

“We’ve let the national anthem become a solo,” Hale said. “We know the words and I love to sing it.”

“I believe God has a place for the city of Ironton to go into a forward direction,” Keith said. “It is not by accident that you live in Lawrence County. You have a purpose here. Realize what is your purpose. We believe in accountability. Let’s do what we’re supposed to do.”

Then, one by one, seven ministers stepped to the microphone to offer prayers for different segments of society. Butch Deer prayed for the government; Carson Hunt for the military; Caleb LaFond for business; Terry Jones for the media; Margaret Tyson for education; Jeff Cremeans for the church and Sallie Schisler for the family.

“I’m calling for America to wake up,” Tyson said. “Look out for our children and our educators. We need a return to responsibility and the ethics we once had.”

LaFond noted the human desire to solve problems alone, rather than relying on God.

Cremeans also prayed for diversity, but for the church.

“There is only one church,” he said. “But many types of denominations. The church is not dead. The church is alive. Being a Christian is serving God day by day.”

Before reading a 600-year-old Episcopal prayer, Schisler said “the breakdown of the family is one of the root causes of the failed life in our community.”

Then the program ended with Ricky Payne singing “The Lord’s Prayer.”

No response from county commissioners A proposed retirement buyout offered to certain county employees has one union upset since it’s... read more