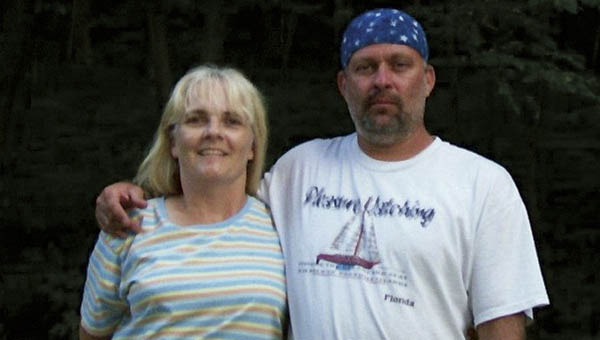 Paula Lawson-Woycheese is seen with her ex-husband James Allen Lawson in this 2011 photo. After last being seen in South Point on April 28, 2012, he was found dead from a gunshot wound in Mason County, West Virginia three and a half weeks later. His murder remains unsolved.

James was going out on errands, before he was expected to meet her and their son for a camping trip in Greenup, Kentucky, that evening.

He was collecting rental money from tenants in Ironton, and made a stop at the Kentucky Fried Chicken in South Point at about 10:55 a.m. He spoke with a man who was going to do work on cars for him at about 1:30 p.m. and made an arrangement to meet him at the South Point Food Fair at 1:50 p.m.

He never arrived to the appointment.

In the first few hours following the missed meeting, Paula said she did not have any idea anything was amiss.

“We were supposed to have gone camping, and we knew he was having a busy day,” she said. “But then, 6:30 rolled around. We went to Greenup and he wasn’t there.”

She tried to call her husband, but got no answer on his phone.

She said, especially so, since the camping trip was for their 11-year-old son.

“He would not have missed that,” she said.

They began searching for him, contacting friends and associates, but had no luck. The next morning, she went to the authorities, filing a missing persons report with the Lawrence County Sheriff’s Office. James’ dentist provided a copy of his dental records.

Police were unable to locate James by cellphone, as it had been turned off, and no activity was reported on any of his bank accounts.

On May 3, his blue 1999 Ford Taurus was found, with no keys, on a lot on James River Road, in Huntington’s West End.

Paula said there was no reason she knew of that James would have traveled to Huntington that day.

On May 20, a body was found, dead from a gunshot wound, on the bank of the Ohio River near Glenwood in Mason County, West Virginia.

It was sent by authorities to the medical examiner in West Virginia, who was unable make an identification, based on James’ medical records. He was eventually identified from photos of his tattoos.

Because James had gone missing in Ohio, had his vehicle found in Cabell County and his body discovered in Ohio, Paula said she was often dealing with different law enforcement agencies in finding and confirming information.

She said, at times, she would know details before the agencies had shared information.

“Any time something went on, I was the one calling to tell them,” she said. “They didn’t know.”

The identity of who killed James has not been discovered, and Paula said she felt authorities only spent a few months on the case.

“I don’t feel it was long enough before things went cold,” she said.

Paula said she has suspicions as to who killed James, and feels the motive was robbery, due to the cash he had on him from collecting rent.

“I got to thinking, knowing whoever did this to him, that there had to be more than one of them,” she said, adding that the lack of answers has been frustrating.

“It just goes nowhere,” she said.

Lawrence County Sheriff Jeff Lawless said James’ case was a “troubling” one for the department.

“Because of the manner in which the body was found,” he said. “We were hopeful we’d be able to have results on this case.”

He said that his office was not the primary investigative agency on the case, because of its interstate nature.

“By the things we were looking at, we believe the foul play occurred in West Virginia,” he said, stating that authorities there had taken the lead.

Attempts to reach the West Virginia State police investigators for this story were unsuccessful.

He said his office is still taking information on the case.

“We’d be willing to accept it,” he said. “And we’d forward it to West Virginia.”

Paula, now remarried, said, while there can never be closure, having answers would at least bring her peace of mind.

“We’d rather have it solved,” she said. “I’m always looking over my shoulder when I’m out and always wondering if people I meet did it.”

Postponement for a year recommended The bridge project on County Road 4 will be postponed for a year to 18... read more