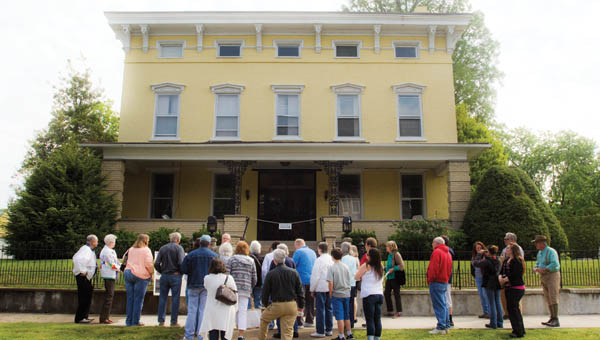 Eventgoers gather outside the John Campbell house as they take part in the Iron Furnace History Tour Saturday morning.

About 125 years after his death Ironton founder John Campbell came back to his beloved city to tell his story to a busload of history buffs.

The appearance of Campbell, portrayed by Stephen Jenkins, was part of a Saturday tour of significant places in the county as part of the ongoing bicentennial celebration.

Jenkins has been portraying Campbell since 2004 when he first started participating in the society’s Historical Walk in September.

Campbell was one of the station masters of the Underground Railroad that rescued hundreds of slaves.

Then it was onto the Olive Furnace on State Route 93, one of the few remaining furnaces in the county.

The furnace produced 16 tons of pig iron a day and was started by Campbell in 1846. It features a Roman arch.

Restoring it is an ongoing project of Cox, a member of the historical society.

She has called in a couple of contractors but they declines to pursue the matter.

“We are trying to find somebody to help us save it,” she said.

Other sites on the tour were Vesuvius Furnace and the museum where Kay Rader did her portrayal of Nannie Kelley Wright.

Ironton gives away runs in 8-1 setback

Jim Walker jim.walker@irontontribune.com   ASHLAND, Ky. — The Ironton Fighting Tigers are like the gift that keeps on giving. Ironton... read more