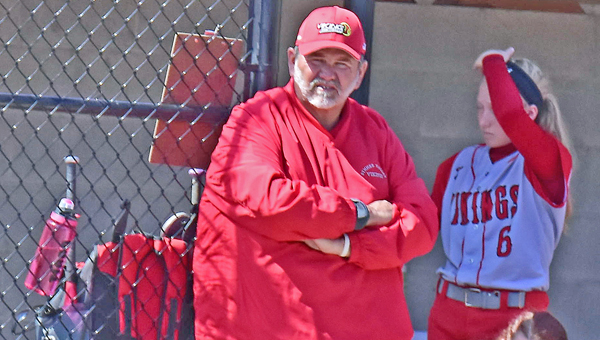 GAHANNA — You can remember a milestone win, but in this case there’s no way to forget.

Symmes Valley Lady Vikings’ softball coach Jeff “Odie” Estep recorded his 400th career win on Saturday in one of the most unforgettable games of his career.

Down 6-0 in the bottom of the third inning, the Lady Vikings erupted for 12 runs including 10 after two outs. They had four doubles and two home runs in the outburst.

Trailing 6-0, Kaitlyn Payne doubled and Tiara Hatfield slammed a two-run homer to centerfield. But the next two batters were retired and it appeared as though the fireworks had ended.

But the Lady Vikings lit another fuse that triggered a chain reaction to light up the scoreboard.

Caitlin Carpenter singled, Kara Saunders doubled and Hannah Mays singled for a run. Stephanie Brown then doubled for two more runs and it was 6-5.

Taylor Webb singled in the tying run and Payne belted a two-run homer to put the Lady Vikings ahead for good.

Hatfield and Sarah Kingery singled, Sierra Ross walked and Carpenter doubled to drive in a pair, Saunders singled in the final two runs.

The Lady Vikings added an insurance run in the sixth on one out doubles by Ross and Carpenter.

“Everyone knows you can’t win games without good players who are committed to working hard and who want to win. And as a head coach you’re only as good as your assistants and I’ve been blessed with good players and good coaches,” said Estep who is a member of the Ohio High School Softball Coaches’ Association Hall of Fame.

The Lady Vikings got win No. 399 for Estep in the first game of the Gahanna Tournament by beating the Central Crossing Lady Comets 3-0 behind the four-hit pitching of Payne.

“Payne did a heck of a job in the first game. She kept Central Crossing’s bats quiet,” said Estep as Payne struck out five and walked just one.

Symmes Valley took a 1-0 lead in the first when Stephanie Brown reached on an error, went to second on a wild pitch and scored on Webb’s base hit.

The Lady Vikings went up 2-0 in the second.

Kingery singled, Ross walked, Kingery moved up on a wild pitch and Carpenter had an RBI single.

The final run scored in the third as Webb reached on an error, went to second on a throwing error and scored when Hatfield singled.

Symmes Valley will play at home on Thursday in the sectional tournament.