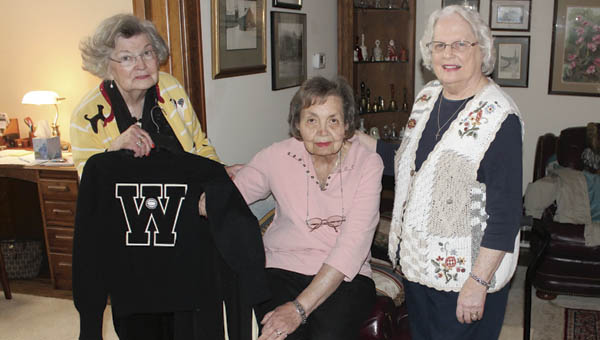 IRONTON — The Lawrence County Museum received a new addition for its collection of local sports memorabilia on Thursday.

Anna Lou Coburn Robinson, who was a cheerleader for the legendary Waterloo Wonders basketball team in the 1954 to 1955 school year, donated her uniform to the museum.

The black and white sweater and skirt, which Robinson said she kept in a cedar chest, is and pristine condition and was presented to museum trustee Kay Rader.

“The biggest thing we ever did was cartwheels,” Robinson said, pointing out the simplicity of the uniform.

She made the donation at the home of Georgia Hairston Triplett, the sister of Magellan Hairston, who served as principal of the school and coach of the team during its 1930s heyday, in which they won two back-to-back Class B championships.

Triplett was a cheerleader for the team in the 1940s and was Robinson’s neighbor.

“They were a wonderful family,” she said. “We didn’t think of them as famous. They were family.”

Robinson said the thing she liked best about cheering for the team was being with the other girls.

“We would go different places, visit other schools,” she said. “Maybe someone had a crush on one of the ball players.”

Robinson remembers meeting many famous players, including getting her photo taken with the University of Rio Grande’s Bevo Francis, who, from 1954 to 2012, held the NCAA record for points scored in a game.

Triplett was easily able to name the best thing to come of her experience.

“That’s where I met my husband of 68 years,” she said, of Merrill Triplett, who was a player for Decatur.

“We’re thrilled to add this to our collection of sport figures,” Rader said, noting the museum already has exhibits dedicated to the Wonders, as well as local sports figures such as George McAfee and Coy Bacon.

The Waterloo Wonders, from Waterloo High School, became well-known for their unlikely success story. Comprised of five boys who practiced in a barn, the team was driven to games in Hairston’s car and amazed crowds with their Harlem Globetrotters-esque trick shots. The team’s name has remained famous well after the closing of the school.

As for the museum, Rader said they have opened for the season and have several events planned for the year. Next is a sing along with Fred Waring, dedicated to the memory of Ironton High music teacher Nell Urick, set for 1 p.m. on June 18.

Last step before construction Before ground can be broken and construction can begin on the Ironton riverfront project, one last... read more