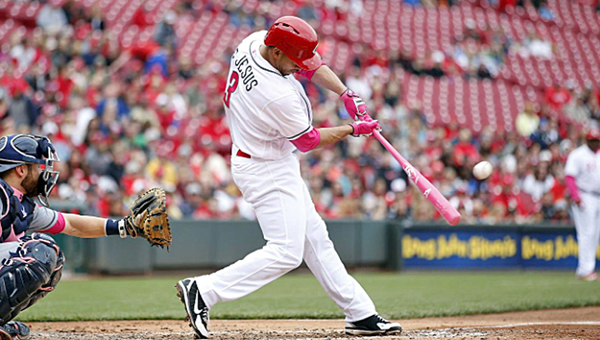 Cincinnati Reds’ Ivan De Jesus hits an RBI double in the third inning of Sunday’s game. The Reds lost 5-4 to the Milwaukee Brewers. (Courtesy of The Cincinnati Reds.com/Joe Robbins of Getty Images)

CINCINNATI (AP) — That a Cincinnati Reds reliever is going to give up a run and probably a lead is almost guaranteed.

The only question is which one.

Jonathan Lucroy greeted Ross Ohlendorf with a tiebreaking home run leading off the eighth inning, then caught pinch-runner Billy Hamilton stealing for the final out as the Milwaukee Brewers beat the Reds 5-4 Sunday for their second straight come-from-behind win.

Lucroy lined the second pitch from Ohlendorf (3-3) over the left-field fence to cap a comeback from a 4-1 deficit and to salvage a four-game split.

Ryan Braun homered the second straight game and is 15 for 35 (.429) during an eight-game hitting streak.

“We have to be a way better pitching staff or this is what you get,” Reds manager Bryan Price said. “The starters aren’t going deep enough into games and the bullpen has to be more effective or we’ll have to go to an eight-man bullpen. We are going to wear the bullpen out by June if we don’t get better.”

Chris Capuano (1-0) pitched a scoreless seventh and Jeremy Jeffress, Saturday’s winning pitcher, got his eighth save in eight chances — after a 58-second video review upheld that Hamilton was out at second base.

“I gave Billy the green light to go,” Price said. “We couldn’t wait for Zack (Cozart) to hit one in the gap. We had to give ourselves more avenues to score. We have to take our shot. We knew Jeffress was quick to the plate. Everything has to go right for them. Jeffress has to be quick to the plate and Lucroy put his throw right on the bag. Our replays weren’t conclusive either but we had to have him look at it.”

After rain delayed the start of the game for 1 hour, 55 minutes, Braun homered in the first.

Reds’ starter John Lamb left with a sprained left thumb while facing Hernan Perez leading off the fifth. Perez homered on Steve Delabar’s third pitch; Cincinnati’s bullpen has allowed at least one run in 25 of the team’s last 26 games, including a major league record 23 straight.

“We were winning,” Lamb said. “My job is to keep the team in the game. That’s where the frustration comes in. I will have an MRI tomorrow. I’m staying positive. They gave me this brace to wear, but I won’t wear it because it makes me feel hurt. We all get jammed every once in a while. I am hoping it doesn’t keep me from my next start.”

Adam Duvall extended the lead to 4-1 in the fourth with his sixth homer, his fourth in six games.

Lucroy’s RBI double cut the deficit to one run in the sixth, and Jonathan Villar tied the score with an RBI groundout in the seventh.

Brewers: INF Scooter Gennett, on the disabled list since April 28 with a strained right oblique, is to start a rehab assignment with Class A Brevard County on Tuesday if he has no setbacks before then, manager Craig Counsell said on Sunday.

Reds: RHP Homer Bailey is playing catch every other day as he resumes his comeback from Tommy John surgery last May. Bailey was shut down until Thursday after experiencing soreness in his elbow during a rehab start on April 26. He reported feeling good after Saturday’s session.

Brewers: Milwaukee is scheduled to open a three-game series at Miami on Monday with RHP Wily Peralta (2-3) starting for the Brewers. Peralta allowed a career-high 13 hits and five runs in 5 2/3 innings during his last start, a 14-5 win over the Marlins on May 1.

Reds: RHP Dan Straily (1-1) is Cincinnati’s scheduled starter on Monday in the opener of a three-game series against the Pirates, who will be making their last visit to Great American Ball Park until Sept. 16-18. Straily allowed two runs and five hits in six innings of the Reds’ 4-1 loss at Pittsburgh on April 29.

Jim Walker jim.walker@irontontribune.com   CHESAPEAKE — The Five at five is not just a talk show on Fox News. The... read more