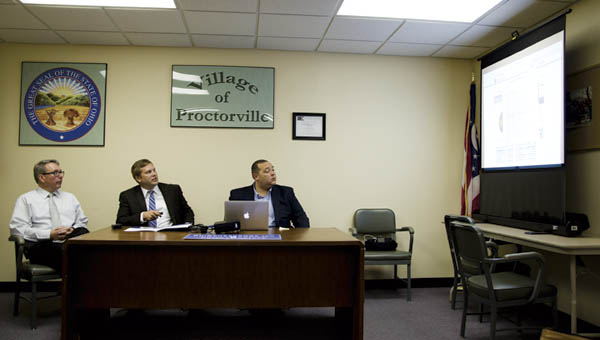 PROCTORVILLE — Those seeking transparency and accountability in government now have a new tool at their disposal.

On Monday, the Village of Proctorville launched a page with OhioCheckBook.com, an online initiative with the Ohio Treasurer Josh Mandel’s office.

The website, launched in 2014, puts all state spending information on the Internet, and 313 local government have pages live on the site, Eric Ochmanek, Mandel’s deputy chief of staff, who was at Proctorville Village Hall for the launch, said.

Darrel Legg, the fiscal officer for Proctorville, joined with Ochmanek in announcing the village’s page, which went live at 9 a.m. on Monday.

“I just felt this was an appropriate avenue for us to display how we operate as a village,” Legg said.

The page features 3,500 transactions for Proctorville, representing more than $1.2 million in spending, dating back to 2013. Legg said, initially, he hopes to update it on a quarterly basis.

The page is searchable and generates a check representation of each line by line expenditure. The information is downloadable to Excel charts and PDFs and is sharable to social media sites like Facebook, Ochmanek said.

“That way, folks can see where the money came from,” he said.

Ochmanek said the posting of the information is not mandated by law, but is part of an effort by Mandel to increase transparency. The treasurer sent a letter to local governments in 2015, calling for them to post their information and join the effort.

“It’s empowering local taxpayers to see how money is spent,” he said.

Proctorville is the first municipal government in the area to take part in the site.

“I applaud fiscal officer Legg for his hard work on transparency,” Ochmanek said. “They’re the first in the county to take part. It’s never easy being the first.”

The website is free for local governments to take part in and all information posted is already part of the public record, Ochmanek said.

Remains in local hospital for injury to leg PROCTORVILLE — A Proctorville teen is in the hospital after accidentally shooting... read more