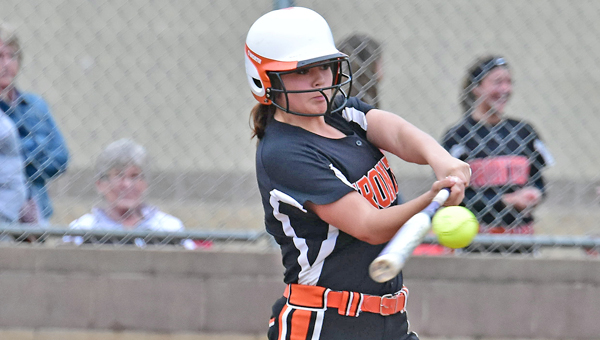 Senior Night was a lot of fun for Kylie Barcus and Katie Burcham, so they decided to have a second one.

Barcus and Burcham played key roles at-bat and on defense as the Ironton Lady Fighting Tigers beat the Portsmouth Lady Trojans 4-3 on Monday in an Ohio Valley Conference game.

Burcham was 2-3 with a double and a run batted in and Barcus was 2-4 with an RBI.

“We played pretty flat tonight, but my seniors really stepped up to help us get the win,” said Ironton coach Missy Fields.

“Barcus made some real nice catches in centerfield. Burcham kept encouraging the infield to get the job done. Both of those seniors did well at the plate as well.”

Aley Carmon pitched a six-hitter for the win. She struck out nine, walked six and none of the runs were earned.

Portsmouth got a run in the first inning when Sharia Kearns reached on an error, Andi Queen and Semajah Parker walked and Eliza Gullett singled.

Shay Cox led off with a walk, Burcham hit into a fielder’s choice, Rylie Vaughn and Halyee Stevens walked and Barcus had an RBI single.

Ironton took the lead for good with three runs.

Barcus was safe on an error, Aley Carmon walked, Ruthie Paholsky singled for two runs and Burcham singled in what proved to be the winning run.

Portsmouth got two more unearned runs in the sixth.

Wesleigh Jackson reached on an error and scored on Kearns’ two-out double. Queen and Bailey Horsley walked and Parker was safe on an error as a run scored.

Carmon got the next batter to ground out and end the inning. She gave up a double to Jackson in the seventh but struck out two of the three outs.

Ironton will host Coal Grove at 5 p.m. on Friday in the Division III sectional tournament.

“We have three days to prepare for the tournament and we will do just that,” said Fields.