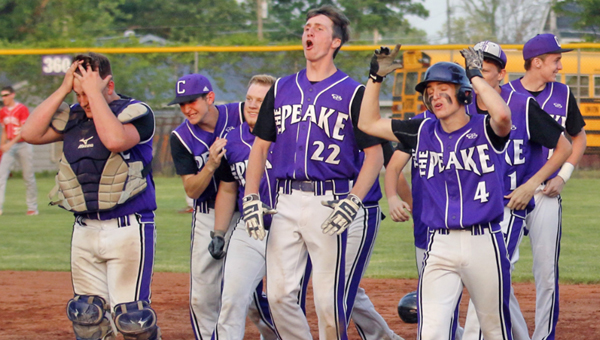 Chesapeake Panthers’ Dalton Nida (22) lets out a shout for joy while Dakota Blankenship (left of Nida) is congratulated after hitting a three-run double in the bottom of the 10th inning to beat the Rock Hill Redmen 5-4 on Wednesday in the Division III sectional tournament. (Tim Gearhart of Tim’s News & Novelties, Park Ave. in Ironton)

CHESAPEAKE — Dakota Blankenship was in the zone. All he was waiting for was the ball to get in the zone, too.

Blankenship got the pitch he wanted and lined a two-out, three-run double in the bottom of the 10th inning to lift the Chesapeake Panthers over the Rock Hill Redmen 5-4 on Wednesday in the Division III sectional tournament.

Rock Hill had taken a 4-2 lead in the top of the inning before the Panthers’ comeback.

“I talked all week about first-pitch approach. If it’s not in the strike zone, don’t swing. Dakota got one in his zone and he smacked it,” said Panthers’ coach Justin Davis.

“I’m glad the kids didn’t quit. We got down and we haven’t hit him for five innings. But we just hung around and got to our best hitter and he came through.”

He struck out nine, walked four and hit a batter before leaving in the 10th inning after throwing 130 pitches.

“McFann threw a very, very good baseball game. He dominated from the fifth to the tenth and then he got a little tired,” said Davis.

Kolton Webb work four innings for the win as he struck out six and walked one. Casey McComas went six innings and struck out seven while walking four and hitting one.

Rock Hill took a 2-0 lead in the top of the first inning.

The Panthers tied the game in the second inning.

Webb was hit by a pitch, Blake Ashworth reached on an error, Jamey Mills double in a run and Kelton Jones singled home another.

In the bottom of the inning, Jones singled with one out. After a sacrifice bunt and a wild pitch put Jones on the third, McComas and Webb walked to load the bases.

Blankenship then hit the first pitch for a double to clear the bases.

“It was a heck of a game. Both teams chances but couldn’t score. It was a game of ‘what ifs’,” said Rock Hill coach Barry Litteral.

Chesapeake plays at Coal Grove On Thursday and visits Wheelersburg at 11 a.m. on Saturday in the sectional finals.