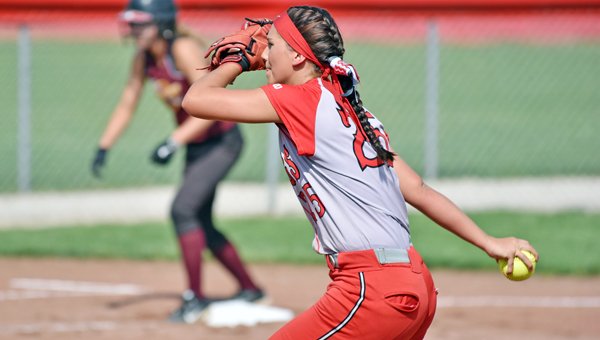 The Symmes Valley Lady Vikings used a 13-run second inning to vault them to a 15-0 five-inning win over the Federal Hocking Lady Lancers on Thursday in the Division IV sectional finals.

Tiara Hatfield was 3-3 with two doubles and two runs batted in and Sarah Kingery 3-3 with a double and two triples plus two RBIs to lead the Lady Vikings’ 14-hit attack.

Kaitlyn Payne got the win with a three-hitter. She struck out 10 and did not walk a batter.

“Kaitlyn did good job again. She kept the ball down and kept them off-balance.”

Symmes Valley (19-5) plays Peebles at 4:30 p.m. on Thursday at Minford in the district semifinals.

The Lady Vikings’ second inning explosion began with a double by Hatfield and a triple by Kingery.

Sierra Ross was hit by a pitch and Caitlin Carpenter hit into a fielder’s choice for RBI.

The final two runs scored in the third.

Hatfield and Kingery doubled for the first run and Ross hit into a fielder’s choice to score Kingery.

Webb and Brown each went 2-3 for the Lady Vikings.