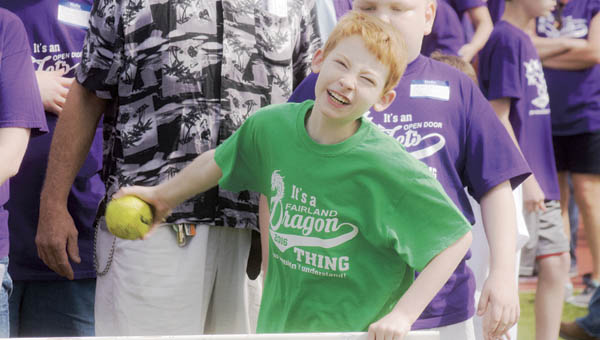 The crowd, from all schools in Lawrence County, was welcomed to the high school by South Point School District Superintendent Mark Christian and, following the school band’s playing of the national anthem and a recitation of the Olympic oath by Zamora Butterbaugh, the games began.

The event, open to athletes with disabilities, featured 50 and 1000 meter dashes, long jumps and softball throwing in age categories ranging from 8 to 21, Molly Fisher, the president of the Lawrence County Special Olympics Board, said.

“This is a great event,” she said. “It’s an opportunity for them to have the best time of the life, and just to be able to have their day and have athletes cheer them on.”

Fisher said the event couldn’t have been possible without the help of volunteers from the community, which came from across the county, but consisted primarily of the South Point students hosting the games.

“It takes a village,” she said. “We couldn’t do this without the volunteers.”

Kim Ritchie, an intervention specialist with the high school, coordinated the student volunteers.

“They run the games and they cheer for the athletes,” she said.

She said she was especially thankful for the help from Christian and the high school’s principal Ben Coleman, who comes from a background in special education.

“He wants to make it bigger and better,” she said of Coleman’s involvement.

Ritchie said that, instead of handing out toys as prizes, as had been done in the past, this year, inflatables were brought in for the children to enjoy.

She said Texas Roadhouse of Ashland had contributed as well, catering the event with hamburgers and hot dogs and doing face painting for the children. Andy the Armadillo, the restaurant’s mascot, was also on hand to cheer for the children and pose for photographs.

Christian proposed that, instead of moving the games to a different host school each year, that they find a permanent home at South Point, a proposal Coleman and Ritchie also supported.

Coleman said a designated location would make it easier for organizers to plan for the games each year, while Ritchie touted the quality of the school’s track facilities.

“And we’re centrally located in the county,” Coleman said. “The decision would have to be made by the board, though.”

Founded in 1968, the Special Olympics, which are recognized by the International Olympic Committee, provide training and competition year-round for more than 4.5 million athletes with intellectual disabilities in 170 countries. Participation in the games is free of charge. Coaches train the athletes to perform the best they can, regardless of their abilities.

Way to clean up county’s eyesores The county has taken the first step to get funds to clean up abandoned... read more