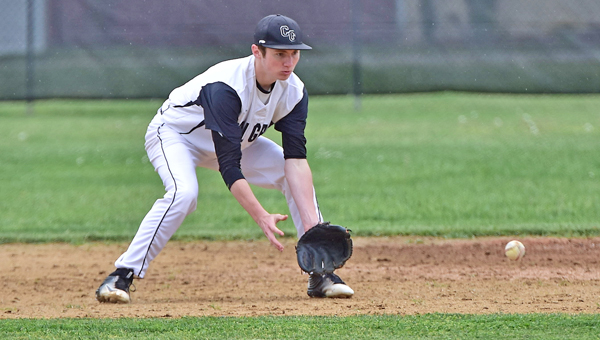 ATHENS — Sam Angelo didn’t win this game single-handed, but he certainly had a hand in it.

The Coal Grove first baseman knocked down a hard ground ball with the bases loaded that led to an out to end the inning and keep the game tied.

The Hornets then scored four runs in the ninth inning to beat the Nelsonville-York Buckeyes 9-5 in the Division III sectional finals on Sunday.

“That was the play of the game,” said Hornets’ coach Dean Mader.

“The ball was hit hard and Sam just laid out. All our kids are moving on a play and Dylan Malone came over and got the ball. Sam got up and covered the bag and we were able to get the out. If we don’t, they take a 6-5 lead and win the game.”

Coal Grove (13-9) will play Minford at 5 p.m. on Tuesday in the district semifinals at Chillicothe Paint Stadium.

The other district semifinal game has Alexander and Lucasville Valley playing at 7 p.m. Tuesday’s winners meet at 6 p.m. on Thursday.

Daniel Rutherford began the winning rally with a leadoff walk. Jeb Jones singled and the runners moved up on a wild pitch.

After a walk loaded the bases, Darin Bloomfield walked on a 3-2 pitch to force in the go-ahead run.

Angelo followed with a two-run single and Cole Gannon hit a sacrifice fly to drive in the final run.

The Buckeyes did threaten in the bottom of the ninth when Garrett Maiden got an infield single and Ted Campbell was hit by a pitch. But Rutherford got a popup to second base to end the game.

N-Y had a chance to win the game in the eighth inning.

Campbell got a leadoff walk and an out later Hunter Dobbs reached when his infield pop fly landed safely behind the pitcher’s mound.

Shakim Williams got a two-out walk to load the bases but Rutherford got the next batter on a pop fly to shortstop on the first pitch to end the threat.

Coal Grove got an unearned run in the first inning on an RBI single by Malone after Rutherford got a two-out single and Jones reached on an error.

Rutherford belted a two-run homer in the third inning after a hit by Jacob Clark to make it 3-0.

The Hornets added single runs in the fourth and fifth innings.

In the fourth, Gannon walked, stole second and scored on Chase McKnight’s base hit.

The run in the fifth scored when Jones singled, Malone walked and Isaac Howard singled.

McKnight started for the Hornets and dominated for five innings. He pitched five perfect innings that included 11 strikeouts.

Nelsonville-York (10-13) finally broke through with five runs in the bottom of the sixth inning to tie the game.

D.J. Hopkins singled to center to start the inning and Jared Clemons and Levi Lent walked to load the bases.

Maiden walked to force home Hopkins, Campbell reached on an error for a run and Reece Robson had a two-run single to cut the deficit to 5-4.

With no outs, Rutherford came on to strike out Dobbs, but the ball got past the catcher and Campbell scored to tie the game.

Rutherford struck out the next batter and after a force out Angelo made his key defensive play.

Rutherford got the win as he struck out four, walked two, hit a batter and did not allow a hit.

“Chase was really in a rhythm and throwing well for five innings and then he just had trouble getting the ball down,” said Mader. “Rutherford came on and did a good job shutting them down. We’re still hitting the ball and we made some nice plays defensively.”

Robson took the loss in relief.