Hundreds turn out for Senior Day 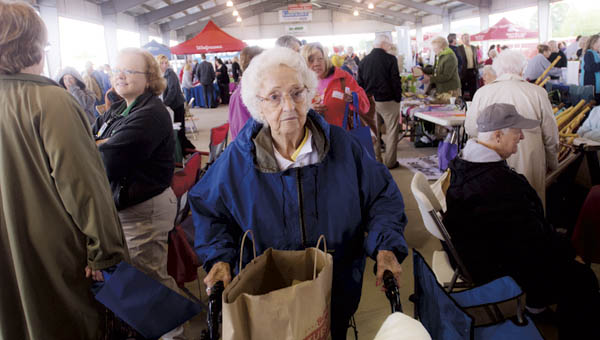 Several hundred people showed up to the event, where they sampled goods and services from more than 80 vendors and were treated to food and entertainment.

“It’s going fantastic,” Darlene Green, the director of the Sybene-Chesapeake Senior Center, said. “I was really worried about the rain at first, but the turnout is great.

Green, who organized the event, along with a committee consisting of Mary Cogan, Marcia Foley and Rick Slack, said the crowd was much bigger this year and saw an increased number of booths.

“We have a cake walk and beans on the kettle she said.”

The beans, cooked on the kettle by Dan Fulks, were among the food offered to attendees, free of charge.

“Dan cooks them, and I’m his laborer,” South Point Mayor Jeff Gaskin, one of many community members volunteering at the fair, said, as he helped the preparation. “We’ve already gone through 50 pounds of food today.”

Many of the booths catered to senior needs, such as the one from Tri-State Mobility, located in Ashland.

“We offer home accessibility products,” Anne Franklin, the manager of the company, said. “We offer things so you can stay at home, like stair lifts and walk-in tubs.”

Other booths featured larger businesses, such as Sam’s Club and Kroger, who had staff on hand to provide information on vaccines.

“We’re giving promotional discounts,” Lawrence Green, in charge of marketing for Sam’s, said, pointing to the flyer he was giving out. “We’re offering discounts on 130 different products, everything from rotisserie chicken to disinfectant. “

Other vendors were of a more niche variety, like Sherri Hamilton, of Willow Wood, who runs the Solace Project.

“I’ve had a lot of tragedy in my life and I cater to people who have grief,” she said. “I offer grave decorations, pet memorials, embroidery.”

Good News Llamas, run by husband and wife Judy and Tom Ross, along with Dale Daniels were also there.

The group had two of their herd of 20 llamas at the fairgrounds, where passersby would stop and pet the animals and pose for photos.

In addition, Judy Ross was giving a demonstration of their benefits.

“I’m spinning, and making yarn from the llamas’ hair,” she said.

She had several products on hand, such as yarn, scarves and bags, which she had made.

There were several services available at the event. Students from Collins Career Center were doing nails, while seniors could get their hair done at booths from Fiesta Salon of Ironton and Curl Up and Dye of South Point.

Those taking a break from sampling the booths could sit down and enjoy music from local dulcimer players and singing from Carlas Leep.

The day also served as a chance for the senior center to honor one of its own.

Ralph Kelly, of Burlington was named as Senior of the Year.

Green said he was chosen because of volunteerism and time put in for the center.

“Well, I help out wherever I can,” Kelly said. “Wherever I’m needed in the center – I do a Bible study and I help out with mechanical and electrical work. I’m a handyman.”

The day’s festivities were the result of longtime planning by the committee. Green said organizing for this year’s fair began back in November.

3 percent remaining Out of an appropriation of $375,000 to pay to house prisoners out of the county, as of... read more