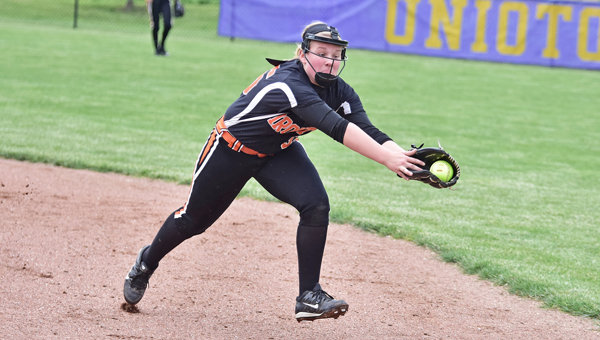 CHILLICOTHE — The Ironton Lady Fighting Tigers are way too kind-hearted.

Ironton gave away seven unearned runs in an 8-3 loss to the Alexander Lady Spartans on Tuesday in the Division III district semifinals.

Alexander scored six decisive runs in the fourth inning when the inning should have been an easy 1-2-3 effort.

Two batters were retired on a pop out to first baseman Katie Burcham and another on a fly ball to leftfielder Zjaytayia Mize. But the batter between the two outs reached on an error that led to two more errors and opened the floodgates.

“I certainly wasn’t ready for our season to end tonight,” said Ironton coach Missy Fields. “We had one bad inning that was hard to overcome.”

Alexander (21-5) got a run in the first inning when Nichole Hudnall singled, Kendall Meeks was hit by a pitch and Hannah Howery singled.

The Lady Spartans went up 2-0 in the second inning with an unearned run.

Abby Howard singled and went to second on a throwing error. Hunter Markins sacrificed her to third and she scored when Marina Mullins grounded out.

Rylie Vaughn singled and went to second when Kylie Barcus reached on a two-out error. Kenzie Cremeens singled to score Vaughn, Carmon was hit by a pitch and later Barcus stole home. Ruthie Paholsky then singled home the go-ahead run.

After retiring Alexander on just a hit in the third inning, the Lady Spartans took advantage of Ironton’s defensive mistakes to scored six times in the fourth inning.

With one out, Howard was safe on an error. She went to second on a wild pitch and — after Markins flied out — scored on a hit by Mullins to tie the game.

The inning continued as Hudnall reached on an error allowing Mullins to score.

Chris Paszke singled, Meeks walked and Howery was safe on an error as two runs scored.

Meghan Trout and Shyla Johnson followed with RBI singles to cap the rally.

Carmon singled to lead off the sixth but Meeks retired the next three batters.

Ironton mounted a threat in the seventh that didn’t materialize.

With one out, Mize reached on a missed third strike. An out later, Barcus singled but Meeks got a ground out to end the game.

“I am still proud of our young team and our two seniors. I wouldn’t want to be with any other group of kids. They worked so hard day in and day out,” said Fields.

Meeks got the win as she gave up five hits, struck out six and did not walk a batter. All three runs were unearned.

Carmon suffered the tough-luck loss. She struck out one, walked one and only one run was earned.

Alexander will play South Point at 3 p.m. on Saturday in the district finals.