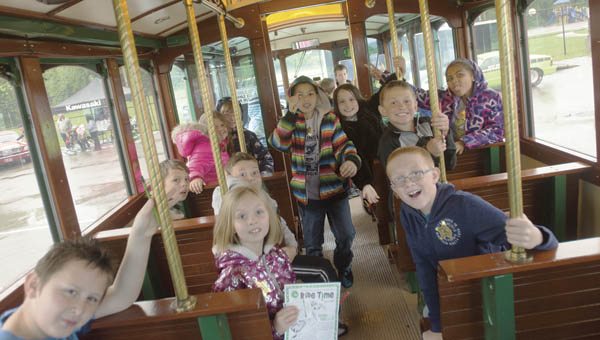 The school hosted its 11th Vehicle Day, a semi-annual event at the school dating back to the early 1990s.

“Vehicle Day gives our students an opportunity to see and actually get into vehicles that they would never ordinarily see,” he said.

Lois Terkhorn, who serves as a volunteer at Harvest for the Hungry food pantry in Ironton, coordinated the day’s activities. She said she had agreed to take over the event, at the request of the school’s previous principal who retired.

Past Vehicle Days have hosted transportation from land and air, including a hot air balloon. A helicopter, scheduled to land at the school for this year’s event, had to cancel due to the cloud cover and rainy conditions of the morning.

After waiting for the morning rain to clear, Clay and Terkhorn led the students, starting with the kindergarten class, around the school, giving them a tour of the vehicles on the lot.

The first stop on the tour was a charter bus, parked near the entrance.

“Pretend you’re going to be going on a trip and think about where you want to go to,” Terkhorn said as the students boarded.

Next, the children entered a “smoke house,” on a trailer set up by the Fayette Township Fire Department.

The trailer, equipped with a smoke machine, gave the children a simulation of a house fire, as the crew shared important safety instructions.

“We try to put them in a real life scenario,” Lt. Chris Vaughn said. “We had a case where a class went through here and then, later, a boy, I think from this school, had a fire in his home, caused by a candle warmer, and he knew what to do.”

Law enforcement had a strong presence at the school, with vehicles on the lot from the Huntington Police Department, the Ohio State Highway patrol and the Lawrence County Sheriff’s Office, where Cpl. Julia Jones handed out stickers to the children as they filed past the cruiser.

On the school’s side lot, Tommy Kaye, of Burlington, was showed students how his John Deere backhoe worked, while Glen Marcum of Huntington showed off his 1938 Plymouth coupe.

While most of the vehicles came from guests around the community, there was one driver the children knew quite well.

Christian Kincaid, of the school’s fourth grade class sat on his KX-65 Kawasaki dirt bike under a tent with his parents, Heather and Bernard Kincaid, who had a display of their son’s racing honors set up.

Also present on the lot was a school bus, which might seem mundane for school children to visit, but, as bus driver Rick Mitchell pointed out, many of the school’s students are driven by their parents and have never been on the bus.

“Some of the kids don’t ride it,” he said. “This gives them a chance to see it, to learn about safety and the rules, which they’ll need for a field trip. They like that they have friends who ride on it, and they get a chance to see what it’s like.”

After all of the school’s classes were finished touring the vehicles, the school was treated to a special lunch, with hot dogs, and beans prepared on the kettle by Dan Fulks of South Point.