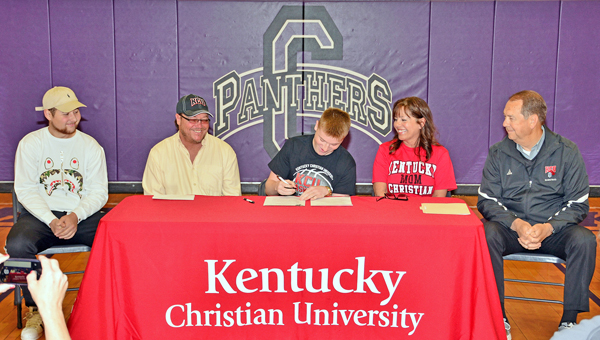 CHESAPEAKE — When players first go to college, they often sit out games and only practice in an effort for them to mature and become a better player. It’s called a redshirt year.

Chesapeake Panthers senior guard Gage Rhoades will be seeing red next fall for the Kentucky Christian Knights, but it’s not the same kind of red.

“The only redshirt he’ll have on is a uniform and a T-shirt,” said Knights’ head coach Grady Lowe referring to the school’s red and white team colors.

“There won’t be any red-shirt going on. He will get to play. There’s no holding him back. He fills a big hole we needed filled. We feel fortunate to get him. Gage will be successful. He’s going to help us.”

Rhoades signed a letter-of-intent on Wednesday to join the KCU basketball program.

Lowe became aware of Rhoades thanks to Knights’ junior forward Hayden Dunn who was an NCCAA All-American last season.

Dunn — who is from Lucasville told Lowe about Rhoades whose Chesapeake team was playing Lucasville Valley in the district tournament.

“Hayden and his dad saw him play and he said, ‘hey, this kid just lit us up tonight. He plays for Chesapeake.’ So the next morning I’m on it. I come to find out that he’s under the radar,” said Lowe.

“We got him down there as quick as we could for a visit and he played with the recruits and the guys coming back and they sold him on the school.”

The district tournament proved to have even greater significance for Rhoades who listed it as one of his biggest memories and accomplishments.

“Winning the district championship this past year and going to the regionals and getting all-state and being up on the wall with my brother out there in the hallway. That’s always been a dream of mine to get,” said Rhoades.

“And winning the league (last year). Just everything. Just winning.”

Scoring more than 1,200 points in his career, Rhoades — the District 13 Coaches’ Player of the Year and North/South representative — averaged 20.6 points, 2.9 rebounds and 2.2 assists.

He was named to the Associated Press Division III first team after being a two-time first team All-Southeast District selection. He was a second team pick as a sophomore.

Rhoades was actually courted by numerous other schools that included Alderson-Broaddus, Muskingum, Heidelberg, prep schools in Florida and North Carolina, and most of the teams in the Ohio Athletic Conference.

He said there were several influential factors including friend and former South Point standout Brandon Barnes who transferred to KCU from Ave Marie University in Florida.

“I picked KCU because I loved the campus and I loved my teammates. Brandon Barnes is going there,” said Rhoades. Coach is really down to earth and nice to talk to. I’m going to get significant minutes as a freshman — 25 to 30 — so that’s good. I want to play and help as soon as possible.

“God helped me out so much through my journey. I kept my faith. Now I just want to keep going and going.”

Rhoades — who has a 3.7 GPA and plans to major in nursing and Biblical studies — underwent surgery last summer for Atrial Septal Defect — or ASD — which is a condition that caused too much blood flow to the right side of his hear.

Rhoades underwent surgery last summer to correct the disorder but bounced back quickly to enjoy an outstanding senior season.

Because of his experience and recovery success, Rhoades has been asked by the Cleveland Clinic to attend the Flying Horse Farm Camp in Mt. Gilead to counsel young children who will be attending the camp and have experienced the same open heart surgery he underwent last year.

“I’m going to get in the pool with everyone whose had the surgery and kind of unify the kids who have been through the same thing I have and tell them nothing is impossible.”

Gage is the son of Ryan and Kim Rhoades of Chesapeake.