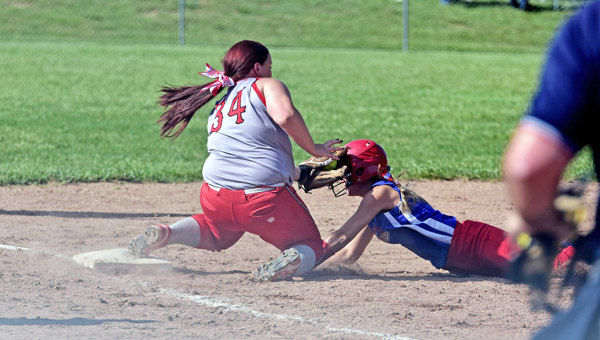 The Lady Vikings did what they needed to keep their tournament run alive as they blanked the Peebles Lady Indians 5-0 on Thursday in the Division IV district semifinals.

“Our defense played well and was able to keep us in the game until our offense got some runs. We hit the ball well but right at someone. Sierra Ross hit three hard shots but right at somebody.”

Payne allowed five hits, struck out four and walked two in getting the win.

Taylor Webb was 2-3 with a run batted in, Tiara Hatfield was 2-3 and Payne blasted a two-run homer.

Madison Pierce took the loss for Peebles (17-6). She gave up seven hits, fanned three and walked one.

“Peebles had a nice team. They were a tough game,” said Estep.

Symmes Valley (21-5) will play Portsmouth Clay at 1 p.m. Saturday in the district finals. The Lady Vikings will be looking to make the third time the charm after losing twice to Clay in the regular season, 11-5 and 12-10.

The Lady Vikings got two runs in the first inning.

Sarah Kingery started the inning with a double. Webb singled her to third and stole second. Both runners scored on a pair of wild pitches.

Hannah Mays walked to leadoff the inning, moved up on a fielder’s choice and Webb singled her home. Payne followed with a two-run homer to centerfield to cap the scoring.

Kaitlin Toller was 2-2 with a double for Peebles.

CINCINNATI (AP) — The Reds got swept by their intrastate rival and lost another starting pitcher, too. Carlos Santana hit... read more