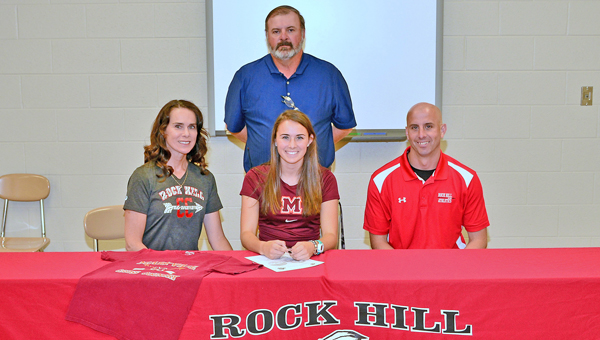 PEDRO — Sarah McFann has been running for a long time and she doesn’t plan to stop now.

The Rock Hill Redwomen senior cross country and track distance runner began running at an early age and she will continue to run next fall after signing with Maryville College in Maryville, TN.

Distance running has been a tradition in the McFann families including Mark McFann who is not only Sarah’a father but the Rock Hill cross country coach.

“I was about eight when I started to run. Everyone (in the family) ran so I ran,” said McFann. “I was thinking about (running in college).”

Beth McFann, Sarah’s mother, said there was a distance race when her daughter was 8-years old and the parents asked the doctor if she should run.

“We asked the doctor if she could run that far and he said ‘yep’,” said Beth McFann.

There were a few colleges who expressed interest and approached McFann who settled on Maryville.

“I had a couple of schools I talked to, but I went to Maryville and I knew I liked it. The campus was nice and everyone was really nice down there.”

While McFann is excited to be running for the Scots, the feeling is mutual with Maryville head coach Tyson Murphy.

“We are very excited to have Sarah in our program. We can’t wait to get her on campus,” said Murphy.

“She is the right fit for all of the right reasons: academically, athletically and, most of all, as a person.”

Stepping up to the next level doesn’t faze McFann who is looking forward to the opportunity.

“I think it’ll be fine. I’ll have more runners to push me. I really haven’t had that,” said McFann.

In the Ohio Valley Conference cross country meet, McFann was fourth overall with a 21:33.75 time.

McFann plans to major in biology and attend graduate school to obtain a degree in physical therapy.