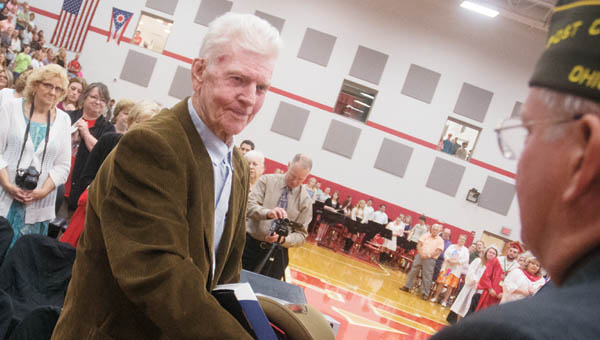 Oscar Gannon, of the class of 1942, receives a certificate during a special recognition.

When Oscar Gannon joined the Army in the early 1940’s at the beginning of World War II, earning his high school diploma wasn’t at the top of his priority list.

Nearly 75 years later, he is a member of the 2016 Rock Hill High School graduating class.

Gannon, who resides in Ohio Furnace, served two consecutive two-year tours of duty during WWII in Hawaii, Japan and Germany. For most of those tours, he detected and destroyed landmines. “He did it with only his mind,” said his daughter, Becky Blizzard, an educational aide at the district’s elementary school. “They didn’t have the equipment that is available today. But, he never worried about dying. He didn’t think he’d live past 40.”

Now 92, he has lived nearly two-and-a-half times longer than his original forecast.

Somewhat of a prankster, according to his daughter, Gannon has always had a lively sense of humor. He also has a benevolent heart. “When he was in Germany, he ordered a bunch of paint and fixed up a community pool for the local kids,” Blizzard said. “He’s always enjoyed helping people.”

Following his military service, life without a diploma didn’t really matter to Gannon. He was a hard worker, as many in his generation tended to be. He labored for decades at places now gone and mostly forgotten until finally retiring from the Dayton Malleable in Ironton. His pride was so strong he wouldn’t consider taking advantage of Veteran’s Administration health benefits until recently.

Several months ago, Rock Hill’s assistant superintendent, Kathy Bowling, received a request from the Lawrence County Veterans Service Commission asking that Gannon graduate and receive an honorary diploma. “We did this a few years ago with Joe Freeman,” Bowling said, noting the school board voted unanimously in favor of granting the request for Gannon. Paperwork was filed with the state. Everything was good to go, but when Gannon was contacted he refused to be part of the graduation ceremony. “He said he didn’t want to take attention away from the kids who were graduating,” Blizzard recalled.

He agreed to a private ceremony with family, friends, Bowling, and Superintendent Wes Hairston at the school in April. “Wes gave a speech and presented him with his diploma,” Blizzard said, adding her father surprised everyone by wearing a cap and gown. “He was very excited to do that with his family and friends.”

Enter Elizabeth Miller, the senior class president, who believed Gannon should participate in graduation with her class. “I saw his story on Facebook and thought it was awesome,” Miller said. She talked to English teacher and senior adviser Kim Zornes, who advised Elizabeth to write Gannon a letter inviting him to attend.

“Her letter was handwritten on stationery and came from the heart,” Blizzard recalled. “I’m extremely impressed with her. How many kids her age would care so much about someone so many decades older?”

“Daddy never does anything he doesn’t want to do,” Blizzard said. “Somehow, she changed his mind.”

Miller was thrilled when Zornes messaged her the news. “Well, you did it,” the text read. “I may or may not have cried,” she recalled. “To see his heart was changed by a letter I wrote felt really good.”

Once Gannon agreed to attend graduation, he asked Mary, “Why am I graduating? Now I have to go to college.” Mary responded by asking if he was going to be a heart surgeon. “No, I’m going to be a brain surgeon so I can fix you,” he laughed.

According to Blizzard, Mary got him back. Prior to his ceremony in April, Gannon obtained a virus and felt ill. “Mom said, ‘Oscar, you can’t die before you graduate!”

On Saturday, in a packed Rock Hill High School gymnasium, Miller kicked off the welcome ceremony with a brief biography of the WWII veteran seated in the front row with his family. “While most of his classmates were beginning their lives and starting families, he was putting his on the line,” she said.

“To say he is a hero is an understatement.”

The crowd saluted Gannon with a standing ovation.

After members of the Veterans of Foreign Wars and senior Jeff Ellis presented Gannon with a certificate and a single rose, another ovation occurred.

Prior to her letter to Gannon, “There was no connection to Elizabeth for us,” Blizzard said, adding her father doesn’t believe he did anything to deserve special recognition. “Maybe this was God’s way of saying, ‘You do deserve attention.’”

Speaking of attention, Gannon’s fear of taking it away from the graduating seniors fizzled during his two standing ovations. Instead, he created a memory his fellow graduates will recall for the rest of their lives.

GETAWAY — A state legislator recently got a firsthand look at what goes on at Collins Career Center. Sen. Joe... read more