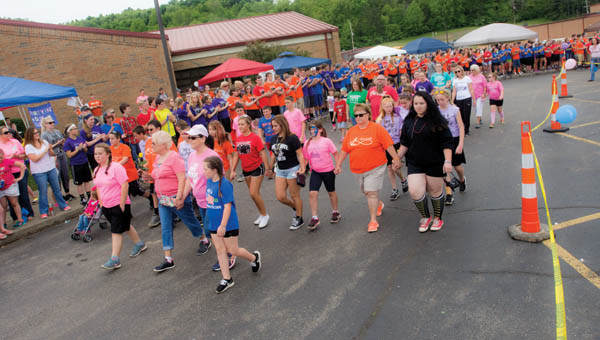 Supporters of the Symmes Valley Relay for Life take part in the survivors lap Friday.

WILLOW WOOD — Hundreds turned out on Friday for the annual Relay for Life at Symmes Valley schools.

The event, now in its 13th year, took place at the high and middle schools, where K-12 students and community members, broken into color-coordinated teams, walked the track to raise money for the fight against cancer.

Lisa Bryant, a health teacher at the high school and coordinator for the event, said the relay started at the elementary school, and the high school joined the effort six years ago.

She said students had been organizing since the end of March for this year’s event, paying $20 a person to walk in the relay.She said the idea is that the 20-person teams are to walk all day, rotating out members as the day progressed.

“Our kids work hard, getting the money together,” she said. “And they’re here to honor those who survived.”

She said last year, the district’s event raised between $25-30,000. All money raised each year goes to the American cancer Society.

“Our students are being unselfish today,” she said. “That’s what I told them this morning.”

In addition to the main walk, the day’s festivities featured a flashmob dance, a dodgeball tournament, cornhole games and a volleyball tournament.

In addition, the students, teachers and community set up tents, where they offered games and sold concessions and other items.

One of the booths on hand was from Family Medical Center, manned by Lori Porter, Mary Beth Blankenship and Christy Prince, staff members from the Aid office.

She said their efforts were sponsored by Ironton-Lawrence County Community Action Organization.

“They provide funding each year, so we can support the relay and come here.”

In the afternoon, the crowds at the two schools merged onto the middle school’s lot for a balloon launch, then all the students, faculty and visitors then gathered around the ring of the track for the survivors walk, where they cheered on those who have beaten cancer, as they walked the track, while “Go Light Your World” by Chris Rice played.

Amy Ferguson, a fifth grade teacher at the elementary school, said it was a community effort.

“It’s not one or two people who put on this relay,” she said. “It’s everyone, and, most of all, it’s the students who put in the work.”