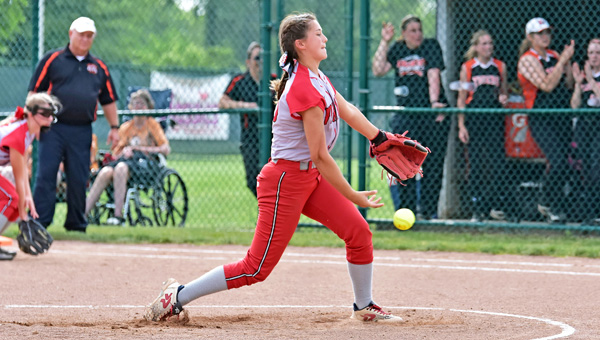 PICKERINGTON — The end came too soon for the Symmes Valley Lady Vikings.

Coming off a stunning 8-1 win over favored Portsmouth Clay on Monday in the district finals, the Lady Vikings were facing the Strasburg-Franklin Lady Tigers in the Division IV regional semifinals on Wednesday at Pickerington Central High School.

“I’m proud of them. They had a great season and our seniors showed great leadership.”

Symmes Valley (22-6) took a 1-0 lead with the aid of a Lady Tigers’ error, but Strasburg rallied to take the lead for good as Morgan Crites singled and Teashauna Alleshouse hit a long home run to left field.

After back-to-back walks to start the inning, Kim Addy singled in a run and Emma Clark had a two-out, two-run single.

Clark also had an RBI single in the fifth inning after a double by Addy.

The lead went to 8-1 in the sixth when Crites hit into a fielder’s choice to drive in a run and Alleshouse added an RBI single.

The Lady Vikings exhibited their season-long fighting spirit with two runs in the top of the seventh inning on three hits.

“We hit the ball but we couldn’t bunch anything together,” said Estep.

“But give Strasburg credit. They’re a good team. Their pitcher did a good job.”

Hannah Duff got the win as she allowed six hits and struck out 10.

Strasburg-Franklin will play at noon on Saturday in the regional finals against the winner of Thursday’s game between Danville and Leesburg Fairfield.

Jim Walker jim.walker@irontontribune.com   LANCASTER — Cecil Fletcher had a lot to do at the Division III regional track meet.... read more