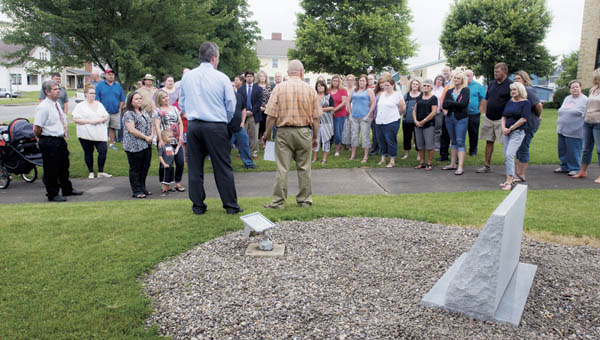 Randy Thompson, right, and Terry Porter, right, address members of Lawrence County Department of Jobs and Family Services during their memorial unveiling Thursday. The memorial shows the names of those employees they lost.

With the Memorial Day weekend approaching, the Lawrence County Department of Job and Family Services unveiled a monument on Thursday to honor former workers who have passed.

A crowd gathered on the front lawn for the dedication of the marker, bearing five names of five personnel who died while working at the agency, from 1988 to 2015.

Director Terry Porter said the monument was installed a few weeks ago and unveiled Thursday morning.

“Today is the first time these people have seen it,” he said.

The ceremony began with a prayer from Jeremy Simpson, of Brookdale Church in Burlington.

“We’ll all each remember those who passed away,” he said. “And pray the work they performed, the relationships we had and the friendships we had never die.”

Randy Thompson, the social services supervisor, spoke on how the departed workers had impacted them.

“Life is a very precious thing,” he said. “It’s been a privilege to have been a part of these folks’ lives.”

Belinda Brown, of AFSCME 3319, who represents workers at the agency, said the monument came as a result of Porter’s work.

“We had a billboard inside with pictures of deceased union members,” she said. “But he came with this idea. It was his idea, his dream.”

Brown said the union had planned to donate to the effort to get the monument, but that became unnecessary due to a generous donation.

Cliver donated the monument and installed it on the grounds, free of charge.

Former worker Mike Patterson said to remember the workers over the coming holiday.

“This weekend, we think of veterans, which we should, but we should also remember these people and their families,” he said.