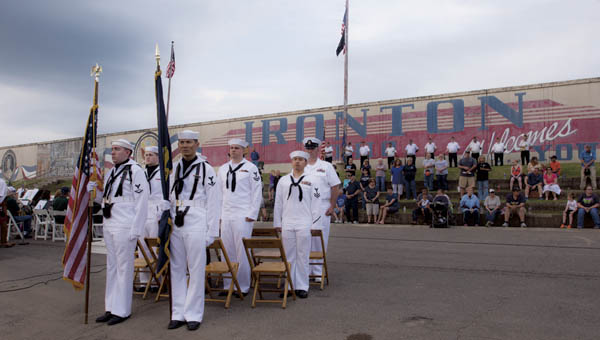 Members of the United States Navy along with area residents are at attention during the annual Navy Night Memorial service in downtown Ironton Thursday.

They marched down Center Street in their dress whites. Navy men and women from the Navy Operational Supply Center came down the street followed by Boy Scout Troop 106.

Thursday was the annual Navy Night, one of the revered traditions of the annual Memorial Day weekend.

Before marching down to the boat ramp, keynote speaker Lisa Knowles of the Naval support center said “It is an honor to be here and to honor those who have gone before us.”

The night began with the honor guard by American Legion Post 433 followed by an invocation by Dr. Denny Hankins. Then came the posting of the colors by Ironton VFW Post 8850 and the national anthem played by the Ohio University Southern Community Band followed by the flag folding ceremony by the Boy Scouts.

Then Knowles spoke about the sacrifice that had been made by generations that came before.

“They died so some of you could raise your families,” she said. “We recognize those who died defending our freedoms.”

Public hearings will be conducted Funding the jail situation was on the table for Lawrence County Commissioners at their Thursday... read more