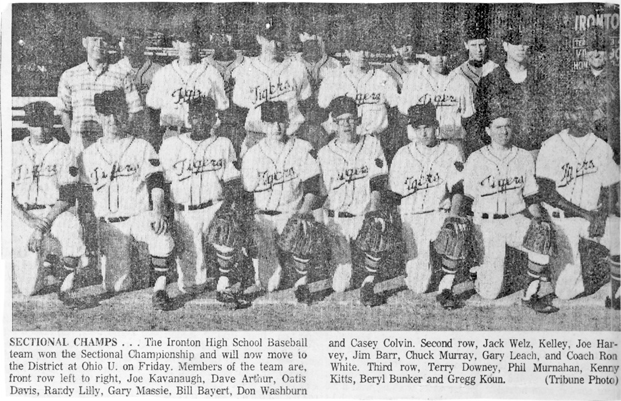 This memory is golden.

The 50th anniversary is considered the Golden Anniversary, and members of the 1966 Ironton Fighting Tigers’ baseball team have golden memories as they celebrate that championship this spring.

What makes this title unique compared to others is the fact Ironton was a member of the now-defunct Central Ohio League that included Portsmouth, Chillicothe, Lancaster, Marietta and Zanesville.

The baseball championship proved to be the only team title Ironton won as a member of the C.O.L. Ironton left the league for the SEOAL in 1967.

Two of the team members were Gary Leach and Jim Barr who were all-district selections. Leach went on to become a starting pitcher for Marshall University under coach Jack Cook.

Besides Leach, Ironton’s other main starting pitcher was a sophomore named Phil Murnahan. The hard-throwing right-handed pitcher set numerous team records and was drafted by the Oakland A’s.

Murnahan — who was clocked as fast as 100 miles an hour — reached the Class AAA level before suffering some arm trouble.

The team went 21-6 that season, won the sectional title and finished as district runners-up. Leach was the winning pitcher on Friday but Ironton had its prom that evening and the district finals were on Saturday afternoon.

Ironton and Murnahan lost to Marietta, a team Murnahan had just beaten the week before to win the league title.

Bunker held the season record for batting average at .467 until it was broken by Mike Smith in 1983. Smith — who played running back at Navy — hit an amazing .571 his senior season.

Dan Meehan also hit .500 for an entire season. Meehan batted .500 and pitched the Fighting Tigers to a state runner-up in 1997.