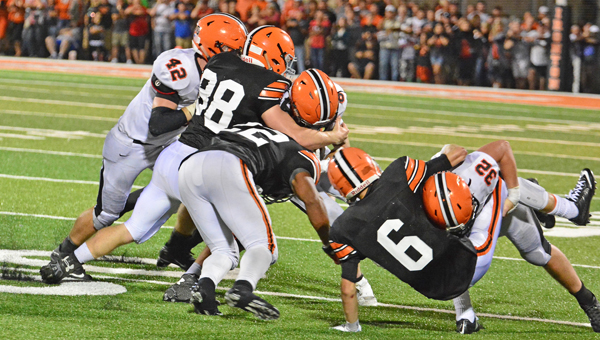 Ironton Fighting Tigers’ Tanner Wilson (88) makes the stop of a Wheelersburg running back during a game last season. Wilson has been invited to the All-American Blue-Grey Super Football Combine. (Kent Sanborn of Southern Ohio Sports Photos)

Whether its is Tanks Memorial Stadium or Paul Brown Stadium, Tanner Wilson is putting up some quality numbers.

The Ironton Fighting Tigers’ sophomore-to-be was selected to attend the Blue-Grey National Super Combine at the Pro Football Hall of Fame Stadium in Canton. Wilson was one of only two freshmen invited.

“It’s an honor to be selected to participate in this,” said Wilson.

The 6-foot-1, 200-pound Wilson began last season as a defensive end and had nine quarterback sacks in preseason games and the season opener against Wheelersburg.

But he suffered a broken ankle in the first quarter of the second game against Russell, Ky., bringing his season to a premature end. He had made a tackle on the opening kickoff and the first play of the game that was followed by another sack.

But he cracked his ankle in two places on the sack and didn’t return until the final moments of the first round playoff game.

Wilson — who is expected to move to linebacker this season — was notified in February that he qualified for the combine at Paul Brown Stadium in Cincinnati. He had previously attended The Best of the Midwest Combine in Indianapolis in January and the Nike Sparq in Atlanta in March.

Prior to his freshman year, Wilson attended Football University at Dublin Scioto High School and was chosen as the top incoming freshman by 247 Sports at the linebacker position.

With Bengals’ quarterback Andy Dalton in attendance at Paul Brown Stadium, Wilson stepped up his performance and shattered his previous 40-yard dash time less than six months removed from his broken ankle.

He was second in the bench press competition with 21 presses of 185 pounds. It was the final event of the day amid the 90-plus degree weather.

Wilson can extend his combine possibilities. If he performs well at the combine in Canton, he would be in line for selection to play in one of the Blue-Grey national All-Ameican Bowls that are played at four different NFL locations including the new Dallas Cowboys’ AT&T Stadium. The Cowboys just happen to be Tanner’s favorite NFL team.

The Canton combine will be held in front of numerous college coaches and scouts.

Another factor in Wilson’s favor is a perfect grade point average that will make him attractive to any program.

Wilson has made unofficial college visits to several schools including Michigan State and Purdue where he drew highly impressive reviews from the coaching staffs at both schools.

Jim Walker jim.walker@irontontribune.com   This memory is golden. The 50th anniversary is considered the Golden Anniversary, and members of the... read more