South Point’s Wagoner to run with the Bears 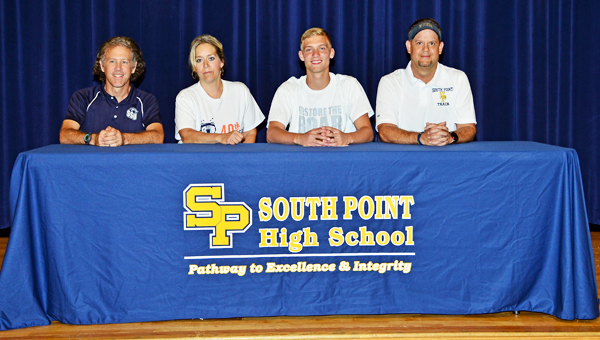 The South Point Pointers’ senior track standout will have a big opportunity to participate in many events after signing with the Shawnee State University Bears on Tuesday.

Bears’ head coach Eric Putnam was forthcoming about Wagoner’s chances to contribute in his first year on the campus.

“He’ll probably do a lot of events in track. I found him just coming over here and reaching out to (Pointers’ coach Todd Wells.). When we got additional events funded for track, he’s a natural,” said Putnam.

“He’ll be one of the most talented all-around track athletes we’ll be getting this next year. He’ll get to compete a lot, as much as he wants as a freshman and that’ll be fun for him.”

The opportunity to compete immediately was a key reason Wagoner decided to sign with the Bears’ track program.

“It’s their first year as a sprint program so I think we have a big opportunity and with hard work we’ll get it,” said Wagoner.

“They can use me anywhere they can. I’ll do anything. That’s how it’s always been. I can do pretty much anything. I like the 400. That’s fun. The 4×4 is actually funner, but the open four is fun, too.”

Wagoner also played football and basketball for the Pointers along with his track career. He had a football offer but opted for track.

“For football I had a (Kentucky Christian University) scholarship but I had to turn it down because I didn’t want to play football,” said Wagoner.

“I had couple of other schools I talked to for track but Shawnee just gave me the best look.”

In fact, Wagoner and the Pattersons will join Owen Chafin to comprise the Pointers’ 4×100-meter relay team that will compete at the Division II state meet this weekend at Jesse Owens’ Memorial Stadium.

“It’s exciting, especially getting to run with two college teammates. It’s going to be fun,” said Wagoner who admitted that the signing of his teammates with Shawnee had very little to do with his decision.

“Sort of, but we both went at about the same time so I guess it was meant to happen. Columbus will be fun because it’ll be our second year going back. I can’t wait to do it again. It’ll be really fun.”

Shawnee is also beginning an indoor team for the first time ever as the varsity sport will be included as a conference meet and have 19 events.

“We’ll try him in the triple (jump). We’ve got a guy coming in as a transfer who has done it so I’d like to see (Wagoner) learn it and see what he can do,” said Putnam.

Stephen is the son of Ann Clay of South Point.

DENVER (AP) — Jon Moscot was grazed in the right ear by a fastball while trying to lay down a... read more