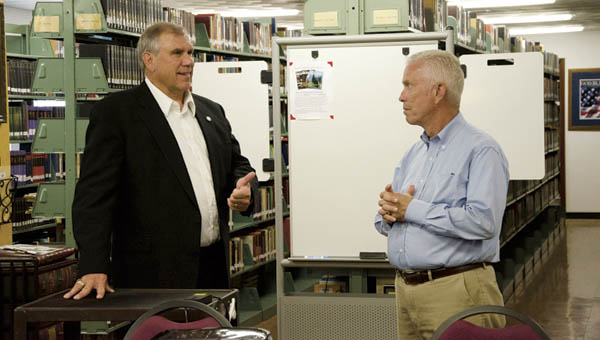 Tri-State Bible College President Jack Finch, tells U.S. Rep. Bill Johnson, R-Ohio, about the need to expand the school’s library during a visit by the congressman to the campus on Tuesday.

SOUTH POINT — Tri-State Bible College is planning an expansion of the campus’ library, and, on Tuesday, Rep. Bill Johnson, R-Ohio, got to see the plans on his first visit to the campus.

College president Jack Finch and several members of the faculty gave the congressman and his staff members a tour of the buildings and told them of the proposed construction.

“We have books here that are older than old,” Finch said, while in the library with Johnson. “If we were to put them on the market, they would be valuable. We like to take this room, expand it and make more shelving for the masters program.”

“Which is not really a lot of money,” he said.

Finch took Johnson around campus, showing him the library, the plaza and the offices of the campus, which also has an additional location in Akron. The college is authorized by the Ohio Board of Regents to offer the Certificate of Biblical Studies, the Associate of Arts degree and the Bachelor of Arts degree in Bible/Theology.

“You can just step in here and see the dedication these people put forward here,” Finch said, showing Johnson a professor’s office.

While the college is private, federal financial aid, such as Pell grants and student loans are available for students. Classes are offered in the spring and fall semesters, and a free Bible class is offered to the public in the summer, Manfred Langer, the college’s vice president, who teaches at the school said.

Following the tour, Johnson joined the faculty for lunch, where he spoke of his faith. “I came to my salvation in Christ in the fifth grade,” he said.

Johnson said he felt the unity of purpose Americans had through the sacrifices of World War I and World War II have faded out as older generations have died.

“We’ve got to find a way back,” Johnson said. “What you’re doing here is a part of that.”

Johnson addressed the question of funding for the library expansion. He said, due to the amount of the deficit, earmarks in appropriations bills are no longer possible.

“Those are long gone,” he said. “And I wouldn’t do that, anyway, because that’s robbing the treasury.”

However, he said his office would offer assistance in the college’s efforts to secure a grant.

Finch and the faculty were pleased with the visit and enjoyed their talk with Johnson.

“It was great to have a person of belief and a congressman visit our college and see what they do,” Finch said.