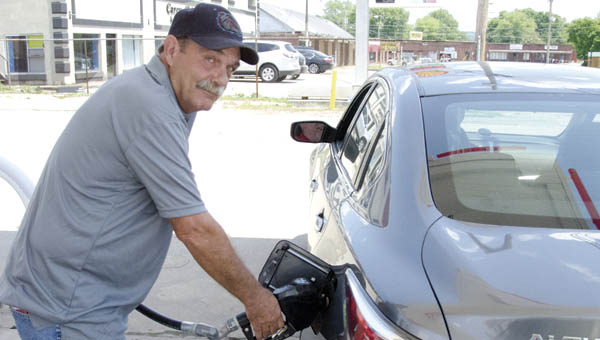 ROME TOWNSHIP — A longtime business just got a rebranding and improved facilities.

Customers stopping for gas in Rome Township on Wednesday were greeted by the new face of the Silver Star Shell station, which had been repainted the night before to match its rebranding.

“They got finished last night,” co-owner Jerry Stephens, a Proctorville native who lives in Getaway, said.

Along with his son, Jason Stephens, he has owned the business, previously an Exxon station, located next to Fairland Middle School for 11 years.

One of the station’s 10 employees, Larry Walters has worked there since the early 1990s, having seen a change in ownership and the change under Stephens from a garage and gas station to a convenience store.

“He runs the morning shift,” Stephens said of Walters. “And he’s the person who tells us what we’re messing up.”

The Silver Star Shell station is named in honor of the owners’ uncle, Curt Stephens, a World War II veteran and Silver Star recipient, whose medal, photo and papers are on display in the Lawrence County Courthouse in Ironton.

Silver Star, the only locally owned station in the Proctorville area, is one of the few places in the region where customers can find full service at the pumps.

With the rebranding, it is the first Shell station in Lawrence County.

Rod Blanton, the station’s supplier and contact with Shell, said, in addition to the repainting, the station had renovated the restrooms and installed LED signing and three new fuel dispensers as part of the upgrade.

“They’re state-of-the-art,” Blanton said of the pumps. “You can’t buy anything nicer or finer. They’re something you won’t see at every Shell station for a couple more years.”

With the change to Shell, the station will now take part in a customer loyalty program with Kroger.

If a customer of the Proctorville Kroger buys $100 in groceries using a Kroger Plus Card, he or she can buy gasoline at the Shell station for 10 cents a gallon below the posted price.

Two public hearings have been set up to get input on a possible public utility tax. At the this past... read more