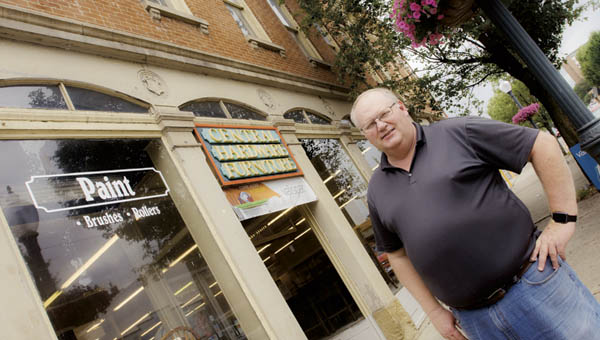 Area businessman Rich Donohue stands outside the Central Hardware and Furniture located along Second Street in Ironton. Donohue is the new proprietor of the building.

Roy Ratliff has seen many things since he took ownership of Central Hardware in 1950, but one thing that has never changed is that people, old and new, continue to turn to the hardware and furniture store for many of their needs.

“We’ve been impacted by several things, like the loss of industry here. But we stay busy. We keep moving forward,” said Ratliff.

Part of moving forward is ushering in a new generation of ownership.

Ironton business owner Rich Donohue recently bought the building and is working with Ratliff to learn and carry on the business model of friendly service and evolving to keep up with customers’ expectations.

Donohue, who owns the Rax Restaurant on South Third Street, said his first order of business was to remodel the furniture showroom, which extends to the third floor. He also acknowledged the need to accommodate customers’ needs. They offer three-year credit terms and are able to special order items not on display in the store.

“It’s been an honor to work alongside Roy and learn from someone who has been here over 60 years,” he said.

When Ratliff’s took ownership of Central Hardware, the business already had a storied past.

Opening its doors in 1909, the business survived a major flood, but a fire in 1926 forced the business to move to its current location on Second and Center streets. The Great Depression followed, as well as another catastrophic flood in 1937.

In addition to the longevity of the business, the building itself has stood for 145 years.

Many visitors from the 1800s until now have written their signatures on the walls of an upstairs room. Ratliff took ownership of the building in 1950, preserving that room and its already 70 years of signatures.

After 66 years of keeping the business going against the odds, he said they’ve survived by offering the same services as the big stores but with a personal connection and community roots.

Ratliff said he wouldn’t want to work anywhere but in downtown Ironton. Although times change, it doesn’t appear that his service model will anytime soon.

Donohue also said giving back to the community is a priority. He cited this as being one of the hallmarks of owning a small business and said, “Revenue generated here is re-invested here and the community as a whole is stronger for it.”