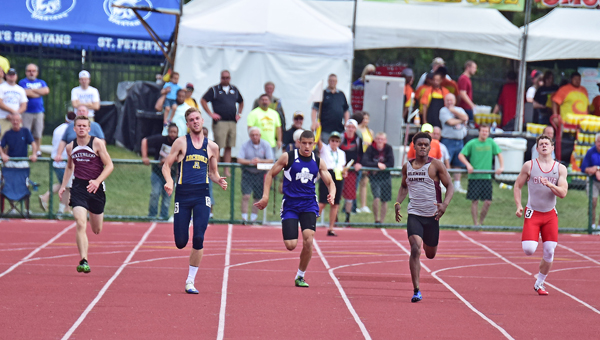 A year later, Fletcher was on the awards’ stand.

After running a 51.19 last year in the Division II preliminaries, Fletcher ran in the Division III state track and field meet on Saturday at Jesse Owens’ Memorial Stadium and came away with a fourth place finish.

The Chesapeake Panthers’ sophomore sprinter ran a 50.14 time in the finals after posting a 49.93 time in Friday’s semifinals that had him second behind Columbus Academy sophomore Jerome Buckner who ran a 49.90 time.

Spencer Cole on New London won the event with a 49.48 time while Buckner was second at 49.52 seconds.

Fletcher finished second in the regional meet behind Buckner.

Nathan Forney of Waterloo ran a 50.40 and was fifth behind Fletcher. Baily Clement of Columbus Grove was sixth at 50.55, Taiwan Dawkins of Tree of Life was seventh at 50.79 and Kevin Boyce of Columbus Academy — third behind Fletcher at the regional meet — was eighth at 51.24 seconds.

Rock Hill senior distance runner Seth Miller ran in the 3200 meters state finals for the second straight year only this time in Division III. Miller posted a time of 9:59.46 and was 15th overall.

CINCINNATI (AP) — Adam Duvall had plenty of time to get ready for his pivotal at-bat. He used it well.... read more