Quitting not an option 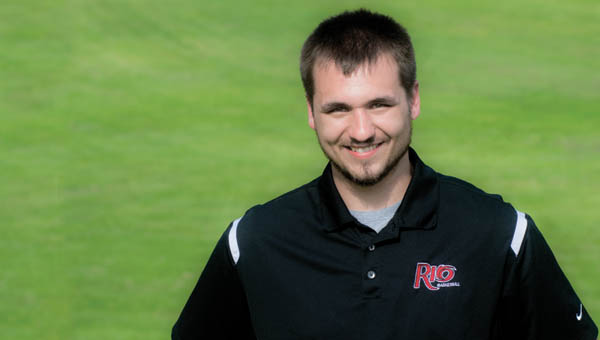 RIO GRANDE — It was a catchy tune, quick, upbeat and a lot of fun. It was “I Ain’t No Quitter” by Shania Twain and one verse goes like this:

I tell him to change his ways,

But he just turns to me and says,

I ain’t no quitter.”

All of the previous material might just be a song, but it could easily be describing Rio Grande RedStorm senior forward Travis Elliott.

The 6-foot-2 former Ironton Fighting Tigers’ All-Ohio basketball standout has proven that he definitely is no quitter.

And if he had quit, no one would have blamed him. Well, except Elliott himself.

The story is somewhat a combination of the movies “Rudy” and “Brian’s Song.” Elliott was given much of a chance to play college basketball and a plethora of injuries never seemed to deter him. He was obsessed or, as the song says, afflicted and addicted.

“When he first came here he was strictly a jayvee player and probably not thought about being on varsity,” said veteran Rio Grande head coach Ken French.

What French eventually asked of Elliott was to be a defensive specialist.

“Coach French and I talked. One thing that got me on the court was my defense. Half the game is defense. I took pride with my defense. The offense came, but for me it wasn’t about scoring. Coach French said I was the best defender in the conference,” said Elliott.

Elliott was assigned to the opposing team’s leading scorer, regardless of his size. Players averaging between 20 to 30 points a game walked away from a game against Rio Grande with only six or seven points to their credit.

“I don’t care how I have to do it. I said he’s not scoring on me. I took pride in it,” said Elliott.

Unfortunately for Elliott, after earning a starting spot as a sophomore and being named a team captain, Lady Luck had abandoned him.

He tore his anterior cruciate ligament in March of 2014. He had micro-surgery that required the doctor to cut open his knee because of so much cartilage damage. It was the kind of injury that forces players to miss at least six months, usually more.

“I was back by the first week of August after surgery in May,” said Elliott. “I was told nine to 12 months (recovery time). They released me because I was doing 245-pound squats. The doctor was amazed at how fast I recovered.”

While Elliott was ready to play again, French had the more pragmatic approach.

“Coach and I talked. I was able to practice, but I wasn’t conditioned. My knee would hurt after practice. So they decided to redshirt me for the 2014-15 season,” said Elliott with disappointment in his voice.

“I was frustrated. It was insane. Just watching your team go to battle and you want to go to battle with them and you know you can’t. I was doing whatever I could to get back on the court.”

Elliott thought his frustrations were over. He came back for his senior year but on the first day of conditioning his knee buckled. He went to the doctor who informed him he had torn his meniscus.

“The doctor said with all these reoccurring injuries, he said I might want to give it up,” said Elliott. “But it was my senior year and I was going to give it my all. I wasn’t going to quit.”

And he didn’t quit and he did come back for his senior year.

“When I got injured and came back, I questioned myself when I got pain. But I said, this is the last time I play organized basketball. I believe in God and I believe in giving my all and that there is a reason for it,” said Elliott.

“If I had torn my ACL again, I don’t think I’d have surgery. I’d have worn a brace and tried to do something.”

During the course of his career, Elliott also broke his nose three times, including his senior year.

“I broke my nose three times and they ordered a mask. I put it on and it obstructed my vision. So I said (to the trainer), ‘I’m not going to wear it.’ The trainer insisted I wear it. I ended up not wearing the mask,” said Elliott with a chuckle.

Besides injuries and broken noses, Elliott also sustained several concussions, not only in college but in high school.

“One concussion my freshman year came when I took a knee to the head. The trainer wanted me to go to the hospital. I knew what was going on. I went back and finished the game. We knew the routine,” said Elliott who was well aware of the protocol for treating concussions.

“In high school and college, I went to the hospital a recorded four or five times. Realistically, it was seven or eight times. We knew there was a chance they wouldn’t clear me, so we wouldn’t go. I didn’t want to take the chance of going (to the hospital).”

Elliott understands the concerns of concussions, but he also knows the diagnosis is different today than previously. Still, he has no regrets.

“What I believe is if the kid really loves what he’s doing, no injury is going to stop him. As a parent, you want what’s best for the kid. But if he loves it, you’re not going to take him out. He loves it. Why take away something he loves,” said Elliott.

“Accidents like concussions, I know they can be serious. But one or two concussions aren’t going to hurt you. People get injured. It’s the way of life. But God has a reason for everything. Sometimes you just get your bell rung. It’s not a concussion.”

Elliott’s determination not to miss any playing or practice time endeared him to French.

“He definitely worked his way up. He never missed a game, never left the game. The last time (he broke his nose) I thought he’d be done for a while. After the game he passed out. His nose was crooked and he was about ready to go down. But he came right back the next day,” said French.

Elliott said his drive and work ethic stemmed from playing at Ironton. He thanked his junior high and high school coaches for their work and French for giving him the opportunity.

“Coach LaFon was always on us. I got a work ethic. If you give 110 percent, you’re going to better yourself. It made me a better man. It showed me I was able to carry over from high school to college,” he said.

Elliott’s drive on the floor was reflected off the court as well.

In order to be nominated by the coach or sports information director of a member school, a student/athlete must maintain a minimum grade point average of 3.5 on a 4.0 scale and must have achieved a junior academic status.

Elliott has a 3.62 GPA with a degree in middle childhood education.

He also was voted the Corey Taylor Heart and Hustle Award his sophomore year.

“He blows his ACL at the end of his junior year. He’s redshirted. He’s a senior captain. He’s a two-time academic All-American. He played defense. He was a screener. He took charges. He gave 110 percent on both ends of the floor. He worked his way onto the varsity and a scholarship his junior year. He started with only an opportunity. He has had as much growth as anyone in our program. He was the poster child for a program,” said French.

And Travis Elliott did all that because he ain’t no quitter.

‘The first year is the hardest’

Newlyweds overcome medical issues This story nearly turned into One Wedding, a Hospital Honeymoon, and a Funeral. Thankfully, its conclusion... read more