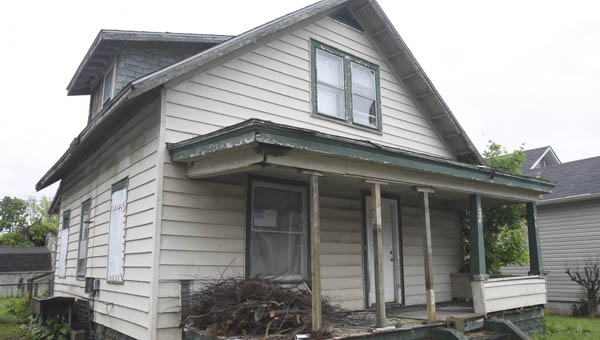 An abandoned house on Second Avenue in Chesapeake was a cause of concern at the May meeting of Chesapeake’s council. Council member Alex Hackney drafted an ordinance dealing with vacant homes, which was passed at Monday’s meeting 6-0.

CHESAPEAKE — The village of Chesapeake took steps on Monday to deal with the issue of abandoned homes and junk cars.

The council voted 6-0 to adopt two new ordinances, drafted by member Alex Hackney, on the matter, which members said has been a problem in the village for some time.

The first dealt with the issue of dilapidated motor vehicles and those with expired tags.

“We’ve got quite a few of those around the village,” Mayor Tommy Templeton said. “We want to fix some type of sticker to put on windshields.”

Hackney said he had rewritten an existing ordinance, which previously had left the task of identifying violations to the police chief.

“This opens it up so that any village official can do it,” he said. “And it nails down the requirements of what a junk vehicle is.”

The council approved the ordinance, which would call for a sticker to be placed on vehicles in violation and would send a letter to the owner notifying that they had 10 days to deal with the matter.

The second ordinance introduced would create a vacant building registry for structures abandoned for more than 60 days. Hackney said it was patterned after a similar effort in place in Huntington.

He said the measure would also authorize the village to make emergency repairs to a structure and then bill the property owner for the work.

“For instance, if a door is open and a kid can run in there,” he said.

Ordinances were already on the books to deal with weeds and overgrown lawns, litter and to allow for the demolition of unsafe structures, but were not being enforced, Hackney said.

He said by allowing the village to make the repairs, it would stop buildings from becoming structurally unsafe.

“The whole idea is to prevent that from becoming an issue,” he said.

The measure would also cover buildings which are already known to be vacant, Hackney said.

The council and officials present discussed some hurdles they could face on the matter, such as determining ownership.

However they voted to approve the ordinance, wanting to move on an issue that, in the past, had “been talked to death,” as member Paul Hart said.

While the ordinance was passed as is, they left the door open for changes and revisions down the road.

“It’s a start,” Hackney said. “We’ve got to come up with something.”

Present at the meeting was Jeanine Classing, who raised the issue at the May meeting of council, when she presented a petition over a vacant home on Second Avenue next to a rental property she owned. She said she had been trying to get something done about the condition of the home for some time.

At Monday’s meeting, she saw the ordinance as a positive move.

“I’m pleased with what you’re doing,” she said. “You’re on the ball to get something done.”

Other business before the council included:

• The council voted, 6-0, to put a 1.5 mill property tax levy on the November general election ballot.

• Revising the ordinance on fees for new businesses coming into the village, passed at the May meeting. The fee is set at $100. Violations would be $500.

• Adopting the current plan from the Solid Waste Authority, which comes up annually. The council approved, 6-0.

• The council voted, 6-0 to give Hackney permission to launch a website for the village, which would post ordinances online. Hackney, who works in web design, stated the site was already built and would be free of cost to the village. He plans to create a feature allowing for online payments of fees and tickets.

• The issue of changing Federal Communications Commission regulations was discussed. The council was presented with the choice of either giving up the free cable currently received at the police and fire departments, or paying an annual fee to Armstrong Cable. The council voted 6-0 to table the matter for further discussion.

• The council voted 6-0 to remove the guardrail on one side of the intersection at the foot of the Robert C. Byrd Bridge, which had been obstructing the view of flowers planted as part of a beautification effort. Council members said the guardrail was already bent, and that the posts behind it, which would be left in place would be adequate to protect drivers.

• Due to the Independence Day holiday falling on a Monday in July, the council voted to have its next meeting at 7:30 p.m. on Tuesday, July 5.

A free summer lunch program for children that was supposed to start this week has been pushed to next week... read more